“We have failed in the essential task of nation building,” said President Chandrika Kumaratunga in her speech to celebrate the fiftieth anniversary of Sri Lanka’s independence. That was in 1998. Seventeen years later, on Independence Day last week, President Maithripala Sirisena soul searchingly spoke of our “great responsibility and duty … today to ask where we have gone wrong, and how we could correct those errors, (and)… as we look at the path we have trod in the 67 years of freedom, and especially since 2009, can we be satisfied with what has been achieved after the restoration of peace?” For his part, Prime Minister Ranil Wickremesinghe drew attention to the dissipation over the years, of the level of unity that prevailed among the island’s different communities at the time DS Senanayake ushered in Lanka’s independence from British colonial rule in 1948. Why string together the Independence Day musings of these three political figures to reflect on where we are as a polity and a society and what lies ahead for the country? 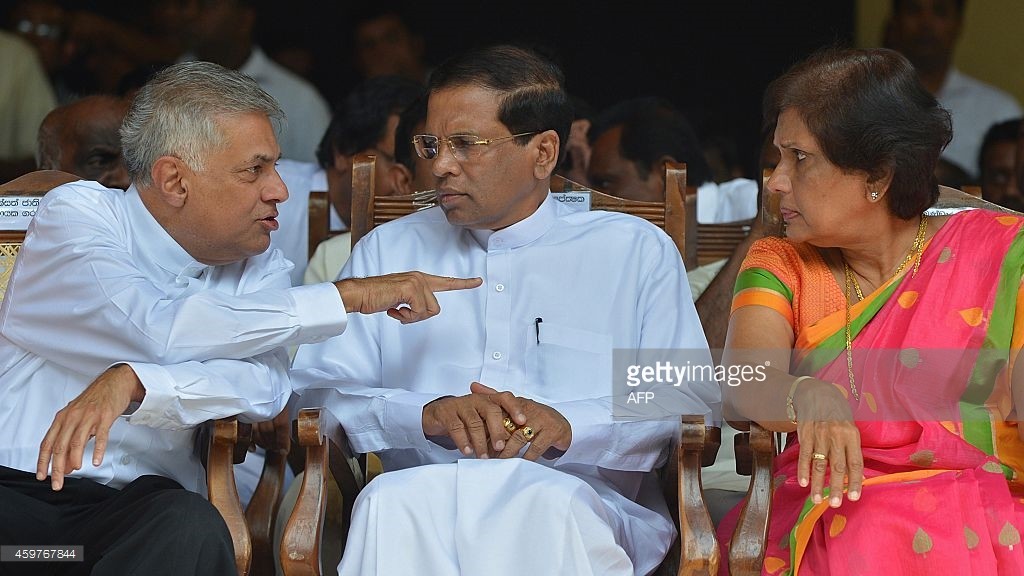 It is because the three of them, regardless of the critical and even uncharitable opinions about them, and regardless of their own not exceptional endowments, personal failings and subjective motivations, objectively embody the country’s collective potential at this juncture for correcting the systemic errors of the last 67 years and the outrageous blunders of the last five years. There is no exaggeration in saying this of the three architects of the January 8 watershed election victory, which saved the country from going indefinitely under a despotic and decadent family rule. At the same time, there is no illusion that the three leaders have the intention and the commitment to subordinate everything else to the task of correcting past mistakes; nor is it a certainty that they will succeed even to a reasonable degree in delivering everything in the 100-Day Plan as they have been promising. The three leaders have distinctly different roles to play and whether they will collectively succeed or not will not only depend on each of them playing their scripted role as well as they could, but also on each of them exercising enough discipline not to do anything that will undermine the implementation of the 100-Day Plan.

Thanks to his predecessor’s astrological gift of a January election, President Maithripala Sirisena became the first ever newly elected leader to preside over Independence Day celebrations within a month of his assuming office. The President’s 67-year question on Independence Day gives a historical perspective to the 100-Day Plan that was cobbled together in the midst of the election campaign last December. In 1948, when Sri Lanka became independent, the country had seven million people; a plantation economy primed for export and posting an impressive balance of payments, co-existing with the traditional subsistence economy involving most of the island’s indigenous people; well established networks of physical and social infrastructure – especially in the areas of education and health; and a liberal democratic political system predicated on a parliamentary system of government, law and order, independent public service, as well as an independent judiciary whose origins went back to the very beginning of British colonial rule in the island. The island was called a ‘model colony’, and was set up to become an ‘Asian Miracle.’

After 67 years of independence, Sri Lanka’s population is over 21 million; over two million of them work as expatriates in Middle Eastern countries; and over 1.5 million people of Sri Lankan origin live in the diaspora, mostly in Western countries, and most of them Tamils. The Sri Lankan economy, after periodical hijacking by comprador and socialist ideologies, is now inextricably integrated into the global market economy. Sri Lanka is no longer an island, politically and economically. The benefits of globalization, however, are not being shared equally. For instance, the country’s balance of payments is significantly sustained by remittances amounting to 10% GDP, by expatriate workers in the Middle East, most of them women working as domestic maids. While the development of infrastructure, physical as well as social, under the British was undertaken within the wherewithal of the plantation economy and without incurring unpayable debt, the Rajapaksa government during the last five years embarked on a reckless program of ill-chosen hard infrastructure development at exorbitant costs involving sole-source contracts and contractor paid loans. In the upshot, a gradually growing manufacturing sector was deprived of investments, thereby stifling productive job creation and export diversification. The soft infrastructure sectors, health and education, were thoroughly neglected and starved of resources, while the budget for defence was not only maintained but was increased even after the war ended in 2009. Sri Lanka continues to rank high in terms of social indicators including life expectancy, but even these advances would have tumbled if the ruinous run of the Old Regime was not brought to a stop in the January election.

President Sirisena’s 67-year question speaks most of all to the deterioration in the areas of governance and of political relationships between the different communities after independence. The two (bad governance and poor inter-ethnic relationship) are interconnected and have fed on each other. A major part of the problem has been the lack of agreement about political fundamentals among the political leaders in parliament. The fundamental disagreement among the political representatives has been less a reflection and more a reinforcement of the non-development of a normative consensus about politics in the wider society. There was no committed agreement even under the most neutral of the three constitutions since 1947, namely, the Soulbury Constitution. The 1972 Constitution spurned consensus in its own making, while its successor and the still-in-force 1978 Constitution turned parliamentary democracy on its head. The 100-Day Program is almost exclusively about transforming governance and says hardly anything at all about transforming inter-ethnic relationships. But good governance can neither be delivered nor sustained without addressing the pre-war political problem and the post-war humanitarian problems of the Tamils and the Muslims.

After the presidential elections, the old parliament has become the principal forum and agency for implementing the goals and objectives of the 100-Day Plan, requiring new legislations and/or constitutional amendments. To its credit and despite the varyingly non-altruistic motivations of most of its members, the current parliament as a whole has brought itself into line with the verdict of the people at the presidential election.

The victory of the common opposition at the presidential election has invariably transformed the old parliament into a transitional body to implement the 100-Day Plan. It is the people who brought about this transformation and not party discipline, or presidential threats and inducements. For much of the 37 years of executive presidential rule and most notoriously during the last five years, presidential powers were used to subdue parliamentarians and distort the working of the parliament as a separate institution. Equally, the near unanimity that is now seen in parliament was utterly unachievable for any parliamentary initiative at any time during the 30 years of parliamentary government that preceded the presidential system.

However, it would be a political mistake and a complacent blunder to take for granted the prevailing climate of unanimity in the current parliament. The three leaders, President Sirisena, Prime Minister Wickremesinghe and former President Chandrika Kumaratunga, have definite and distinct roles to play in preserving the climate of unanimity until the entirety of the 100-Day Plan is implemented. Once the political fundamentals including checks and balances are normatively in place, the country can return to the cut and thrust, as well as the farce and circus, of competitive parliamentary politics.

It is fair to say that President Sirisena has so far been showing that he has the measure of what it takes to play his historic role in this process of transition. Like Prime Minister Modi in India, the new Sri Lankan President is demonstrating that someone from outside the elitist echelons is better able to cut to the chase in determining and focusing on priorities, as well as bridge the usually unedifying gap between the personal life style and public professions of most South Asian political leaders. As they say about walking the talk, President Sirisena not only talks but he walks the talk. At the personal level, his charisma is a function of the qualities such as humility, simplicity and austerity that most people see in him. The choice of a modest official residence, the insistence on dropping the honorific (His Excellency) while addressing him, and his desire to keep his family out of the political limelight – are refreshing changes after what the country has been put through during the last five to ten years. Remarkably as well, these attributes seem to come to the man from Polonnaruwa more naturally than as a necessary reaction to the rags-to-riches lifestyle of the Rajapaksa families that drove everyone nuts. Mr. Sirisena’s political charisma is in his determination to terminate his own excessive powers, and in his readiness to achieve that goal by working with all parliamentarians cutting across party differences.

Prime Minister Wickremesinghe, on the other hand, is not coming across as being as single minded as President Sirisena is, in regard to implementing the 100-Day Plan. He seems to be too easily distracted in two directions. First, he is understandably pre-occupied with preparing the UNP to secure the largest number of seats in the forthcoming parliamentary election. Second, he, as well as most of his ministers, seem to be running government business as if there is a majority UNP government in power.

Either way, Ranil Wickremasinghe and the UNP are risking the disruption of the prevailing climate of unanimity in the current parliament. More importantly, if the intention is to permanently transform parliament from being an adversarial talk-shop into a purposive workshop based on Oversight Committees, as alluded to in the 100-Day Plan, the new government must start working co-operatively with the opposition in parliament, including the SLFP which still has more than half the members in parliament.

The blessing in disguise for the new government is that the SLFP parliamentarians are shell shocked not only because Mahinda Rajapaksa was defeated, but also because they know they cannot in good conscience defend anything that the Rajapaksas did after winning the war in 2009 and winning the second term in 2010. The Rajapaksas, on the other hand, have more important things to worry about, such as avoiding corruption revelations and potential prosecutions, than orchestrating a political comeback. The interim government must use this time and space judiciously and co-operatively with the opposition, if it is serious about implementing the governance plan it put before the people on January 8.
[Original Caption: President Sirisena’s 67-year question and the 100-Day Plan]
– The Island