[Supporters of victorious opposition candidate Maithripala Sirisena celebrate in Colombo ( Buddhika Weerasinghe/Getty Images) ]
Updated by Amanda Taub –
In retrospect, former Sri Lankan President Mahinda Rajapaksa probably regrets his decision to campaign for reelection on the slogan that voters should stick with his administration because he was a “known devil” and his opponent was an “unknown angel.”

At the time, Rajapaksa’s hold on power had seemed unshakable; his repressive, authoritarian government, rock solid. But on January 8, he was peacefully voted out — and, just as surprisingly, failed in what appears to have been an attempted coup to remain in office. Rajapaksa’s loss of power shocked the world, and not just because so many expected him to hold on.

We like to think that this sort of thing only happens in popular uprisings or free elections, but what happened in Sri Lanka was neither, and the lessons go way beyond this one country. If other autocratic leaders, like Russia’s Vladimir Putin or Sudan’s Omar Hassan al-Bashir, are not watching with concern and worrying that the same could happen to them, they should be. 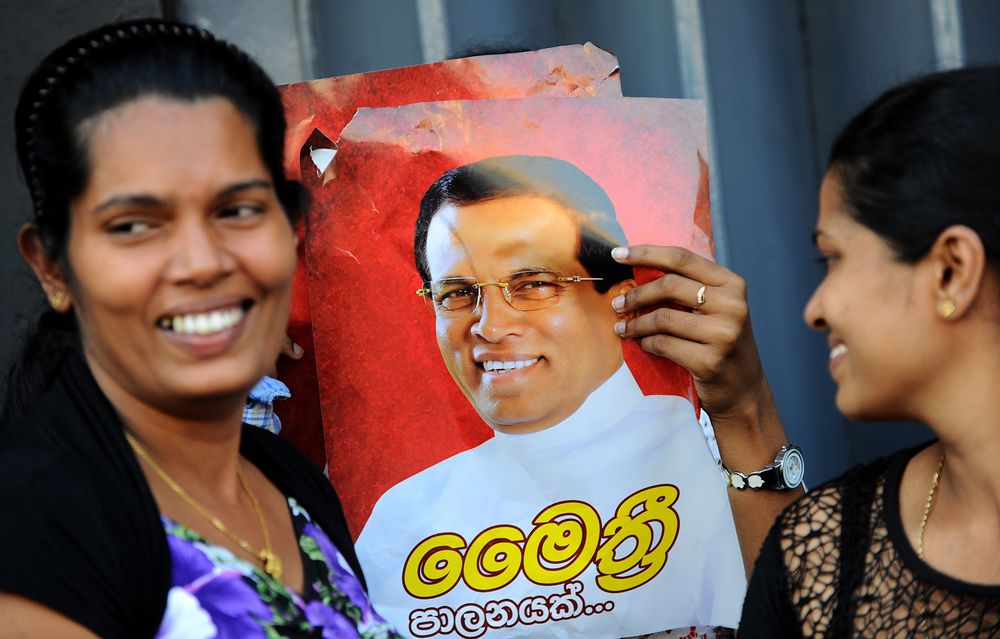 Sirisena supporters hold a campaign poster as they celebrate the the election results in Colombo on January 8, 2015 (S.KODIKARA/AFP/Getty Images)

Sri Lankan President Rajapaksa, in office since 2005, was an authoritarian ruler known for his brutality towards anyone who threatened his power. Although he was an elected leader, he consolidated his control over the country through tactics that included installing family members in key governmental positions, silencing journalists critical of his regime, and employing torture and forced disappearances against human rights activists. However, he enjoyed considerable support amongst members of Sri Lanka’s Sinhalese Buddhist majority, as well as its powerful military establishment.

So when he called in November for early presidential elections to be held January 8, virtually everyone — especially Rajapaksa himself — expected him to be reelected in a landslide.

But on November 21, just three days after Rajapaksa announced the new elections, one of his key allies, health minister Maithrala Sirisena, announced that he was quitting the administration and standing as a candidate for president.

Sirisena’s defection proved to be the first sign of a massive change in Sri Lanka’s political landscape. In the weeks that followed, more Rajapaksa loyalists announced they were shifting their support to Sirisena. Eventually, the opposition parties representing Tamils and Muslims, Sri Lanka’s largest minority groups, also threw their support to Sirisena, giving him a decisive electoral majority.

By 3:00 am on January 9, the day after the election, the results were in: Rajapaksa had lost. He summoned his attorney general and army commander to the presidential residence, and appears to have requested their assistance in perpetrating a coup to keep him in power.

If so, they refused to comply. At 5:30 am, Rajapaksa conceded. Sri Lankans had voted an incumbent president out of office for the first time since independence in 1948. 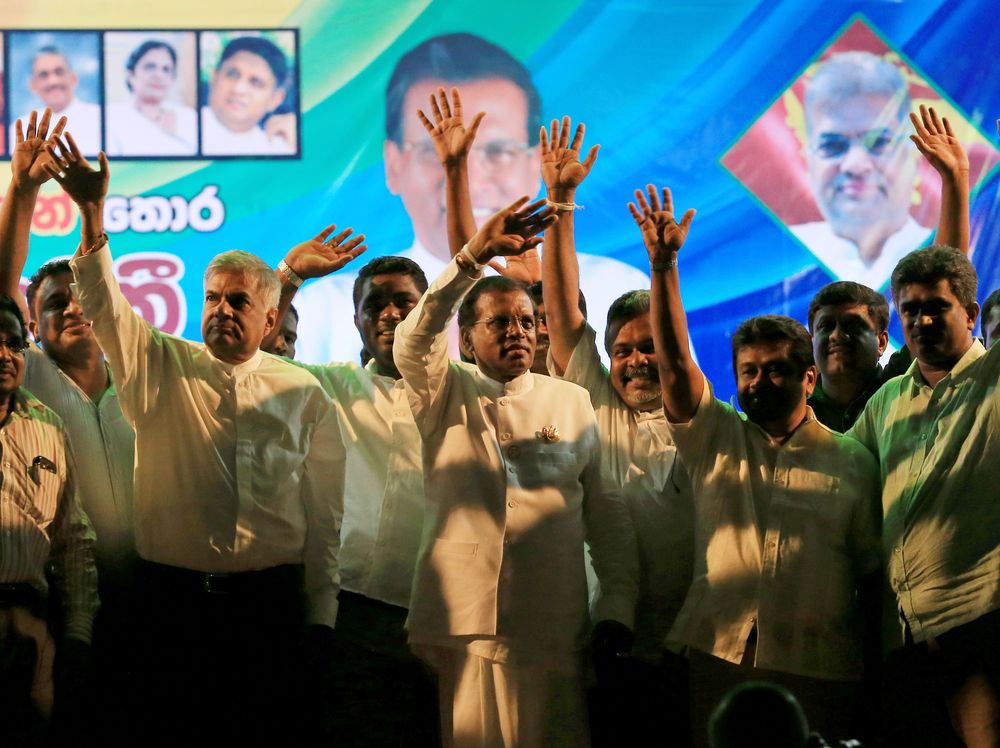 There is a lesson here for other autocratic rulers. If you want to hold onto power, you should be at least as worried about the people who attended your last birthday party as you are about youthful idealists’ street protests.

It’s romantic to believe that popular uprisings like the Tahrir Square protests of 2011, Russia’s White Ribbon movement of 2012, or Ukraine’s Maidan protests of 2013 are the most serious threat to autocrats’ power. But Sri Lanka shows that, even in the case of power transfers that seem like the result of popular movements (in this case, a democratic election), the change is often actually driven by elites shifting their loyalties to a new candidate at a key moment.

Rajapaksa was brutally effective at crushing bottom-up democratic activism in Sri Lanka. But it turns out grassroots activists weren’t the people Rajapaksa really needed to worry about. Sirisena was a close ally who was a guest at Rajapaksa’s birthday celebration a mere two days before announcing his candidacy for president. Other elites quickly shifted to Sirisena’s camp, leaving Rajapaksa without support.

The same thing could happen to just about any autocratic leader.

Consider, for example, Vladimir Putin. He enjoys extremely high approval ratings, and is a beloved figure among ordinary Russians. And there is no one in Russia who seems powerful enough to be a possible Putin replacement, or any signs that Russian elites are beginning to doubt his rule.

But the same could have been said about Rajapaksa up to the moment when Sirisena announced his candidacy. It turned out that his popularity was fragile, and reliant on quiet but crucial support from key members of Sri Lanka’s most powerful institutions. When that support eroded, so did his popularity — in less than two months.

Putin’s popularity, like Rajapaksa’s, has been manufactured by pliant state media with the assistance of key allies among the Russian elite. The same elite-run forces that bolster autocratic leaders — supportive state media, a justice system willing to overlook corruption, helpful security services — can be used to take their rule away.

NYU professor Mark Galeotti, who studies Russia, told me recently that elite abandonment is far more of a risk for Putin than are the protesters who periodically throng the streets of Moscow. The real concern for Putin, he argued, should be that Russia’s elite power players — such as the leaders of the security services and major business interests — would lose faith in him, and decide that it was time to replace him with someone who offered better prospects for the long term.

Why leaders like Rajapaksa and Putin have to rely on elites 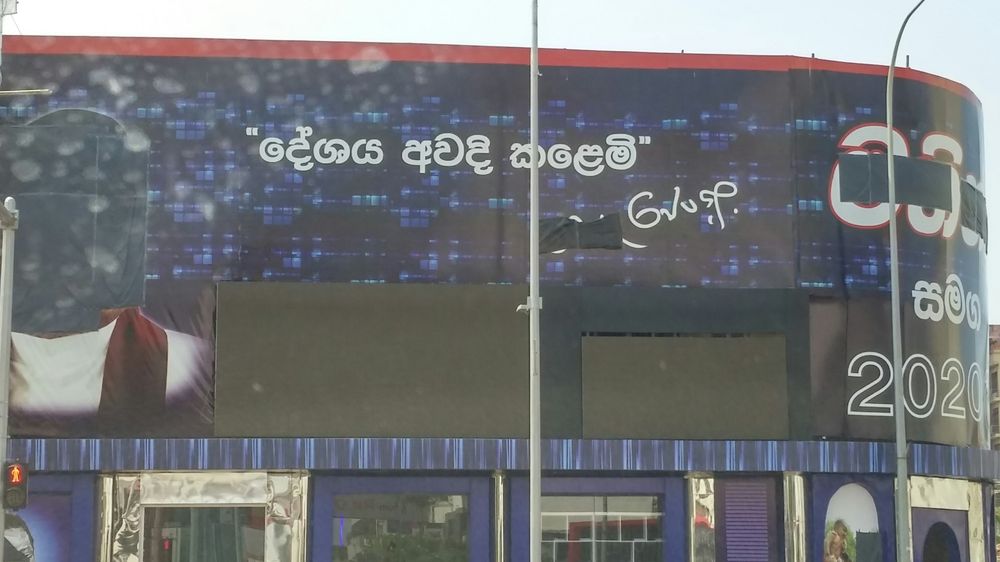 A Rajapaksa campaign billboard in Colombo, with Rajapaksa’s face blacked out. Gosh, almost seems like some kind of metaphor. (Kate Cronin-Furman)

It might seem like authoritarian rulers could head off this risk by keeping those elites weak and unable to threaten them. But no one can rule alone. Even authoritarian leaders need the support of strong elites to hold power. Depending on the country, that could mean maintaining strong ties with the security services, private business interests, or powerful families.

This is the autocrat’s dilemma. Give your elites too much, and they can use those resources to develop power independent of your own. But give them too little, and they might be enticed away by someone else. If elites feel like they’re getting a low “return on investment” for supporting your regime, they might switch support to someone else.

Kate Cronin-Furman, a lawyer and PhD candidate at Columbia University who studies Sri Lanka, said that current evidence suggests that this was a major factor in Rajapaksa’s downfall. Rajapaksa’s allies thought they were getting a bad deal, with the the Rajapaksa family taking too much power and money for themselves. Sirisena, it seems, had more to offer. 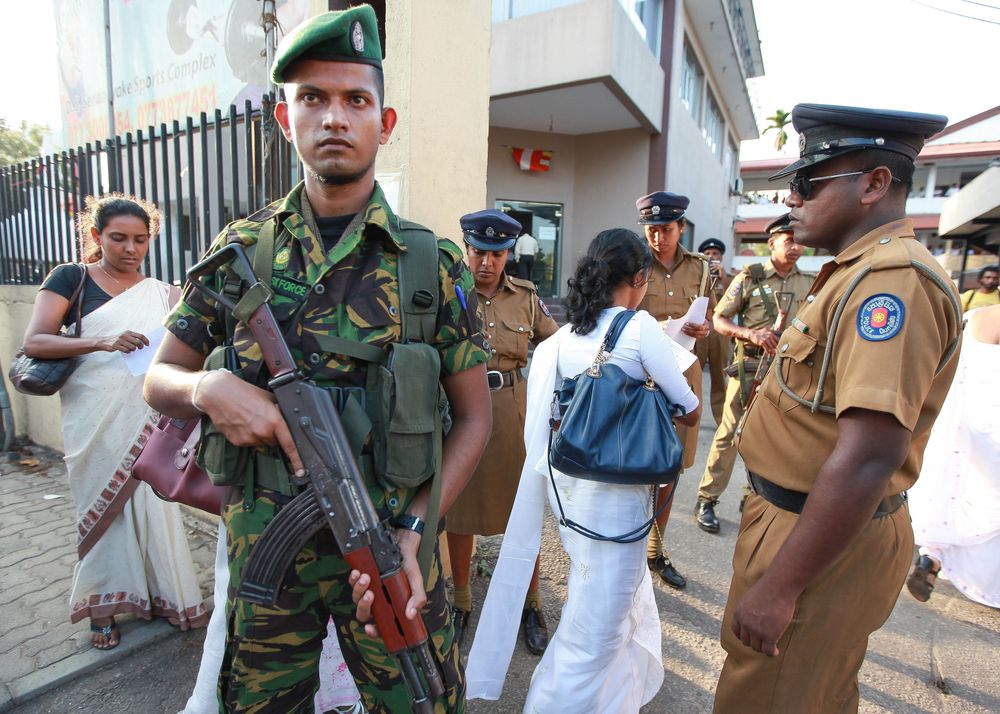 Overt military dictatorships are falling out of fashion these days, but nominally democratic regimes with authoritarian features, such as those in Russia, Rwanda, or Cambodia, are all the rage. For those leaders, security services, such as the army, police, and intelligence agencies, are an essential support base for exercising and keeping power. But their support can be fickle. And as Sri Lanka shows, losing it can be decisive.

The army was a key element in Rajapaksa’s power base throughout his rule. And he made sure to repay them handsomely for their support, including by granting economic incentives that gave them an edge in private business.

But that wasn’t enough to ensure their loyalty. The military, crucially, is backing the new Sirisena government. While the allegations that Rajapaksa attempted a military coup in the hours after the election are thus far unsubstantiated, it is very clear that the military refused to take action to keep him in power.

The army, Cronin-Furman explains, may have concluded it had no reason to believe that Rajapaksa would protect their interests better than Sirisena: “For the army, there probably is not a tremendous amount of difference between a Sirisena administration and a Rajapaksa administration on key issues that are important to them.”

That example should be keeping Putin, for one, awake at night. According to Galeotti, the Russia expert at NYU, Russian security services still strongly support Putin — but there are signs that their support is increasingly pragmatic, rather than ideological. “A few years back, they were really convinced Putinists. It was an emotional thing. They believed that this was a guy who had saved Russia. Now, I think they tend to be pragmatic Putinists.They know that their interests are being served.”

Pragmatic support can be fragile. If elite loyalties shift in Russia, the army and intelligence services could transfer their support to a new candidate whose leadership offers greater benefits or fewer drawbacks than Putin’s.

Sri Lanka shows that defection by security services can be the last nail in an autocrat’s coffin.
VOX