Common opposition Presidential candidate Maithripala Sirisena has proposed in his manifesto which was released today, to dissolve Parliament on or after April 23rd and appoint a transitional government under which a Parliament election will be held.

Sirisena’s manifesto, which was released at the Viharamaha Devi Park today, details in point form his 100 day plan if he wins the January 8 Presidential election.

Read the manifesto in full here or http://f.cl.ly/items/121u3v282K3A0c1C0K2P/Manifesto-English.pdf 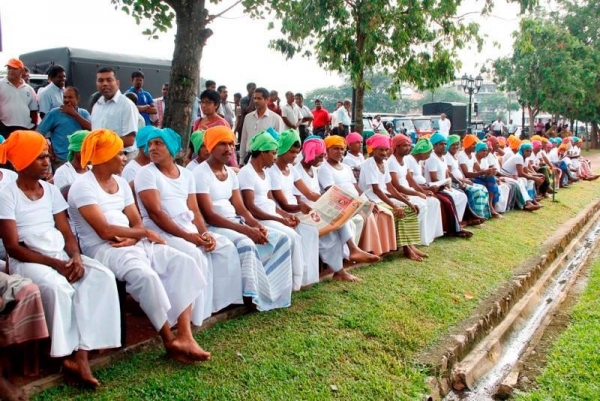 Farmers at the launch today

He also proposed that the cabinet in the new government after April be appointed consisting of members from all political parties.

Under the National government, a policy framework will be created under which critical national issues will be addressed.

“Some are claiming if Mahinda Rajapaksa is removed as President during the election another war will take place. We will not allow the LTTE to raise its head again,” he insisted.

If he wins the election, Maithripala Sirisena says he will take oaths on January 10 and will appoint UNP leader Ranil Wickremasinghe as the Prime Minister in a cabinet to be in place till April.

Sirisena also notes that if he comes to power, an investigation will be conducted on the import of super luxury motor vehicles, racing cars and motor cycles and action will be taken to recover pertinent taxes.

Since irregularities have happened in the constriction of power plants with overpayments more than 50% being made, action will be taken to change that state of affairs.

“Our country has become economically bankrupt through mega projects such as expressways, railways, harbours, airports, power stations, reservoirs which are paraded as Asian miracles in the energy sector. These are national robberies of an unbelievable scale. I will take into custody all illegal firearms that are in the possession of individuals allegedly under the cover of the public service. Illegal armed groups will be disbanded and their leaders and those who use State property for such activities will be dealt with strictly under the law.  A regular census will be taken of the armaments, money, foreign assets etc. of the LTTE and those who have acquired them illegally under the cover of public service will be punished severely irrespective of their status and all such weapons and property will be confiscated. I will immediately stop all illegal filling of sea and land that is being carried out by the State security forces in collaboration with private security services. Also those who engaged themselves such activities illegally will be severely punished,” he added.

He also notes that all those who were subjected to political victimisation and punishment including former Army Commander Sarath Fonseka and the 43rd Chief Justice Madam Shirani Bandaranayake will be reinstated in their lost positions and their lost rights will be restored.

He also said that he will make Constitutional provisions for the establishment of a powerful Ant-corruption Commission which is capable of finding out technical, managerial and financial corruption without any political interference in its activities.