[Chandrika Kumaratunga’s car too was attacked]

On the day governing party goons attacked a opposition group including former President Chandrika Bandaranaike Kumaratunga the police had instructed the Out Patient Department (OPD) doctor of the Beruwala base hospital  Ms, Samarasinghe,  not admit any casualties to the hospital, says CMEV communique.

As a result a supporter of common opposition candidate, former opposition Urban Council leader Mohammed Mansoor Dalhan was taken to Beruwala base hospital but refused admittance by the hospital.

CMEV monitor reported that supporters of United People Freedom Alliance (UPFA) had attacked former President Chandrika Bandaranaike Kumaratunga and Provincial Councilor Ms. Hirunika Premachandra at about 10.00pm. After a rally in Beruwala town, President Kumaratunga and Ms Premachandara had gone to dinner at Provincial Councilor Mohammed Jemine Marikar Mohammed Isthikar’s house , some 350m from Beruwala town(Peenawala). During the dinner a group of people had hooted and stoned the house. President Kumaratunga and Ms Premachandra had managed to leave the house with the support of their security and supporters of the common opposition candidate. According to the CMEV monitor, the Police and Special Task Force had run for cover.
Subsequently, a fight ensued involving both parties resulting in damages to property including President Kumaratunga’s vehicle. 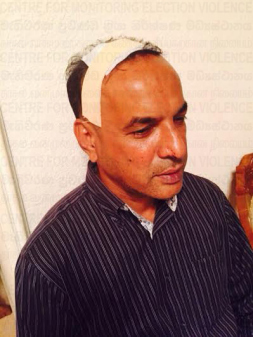 A supporter of common opposition candidate, former opposition Urban Council leader Mohammed Mansoor Dalhan was taken to Beruwala base hospital but refused admittance by the hospital.

The Special Task force and Beruwala Police were able to disperse crowd.

According to the Out Patient Department (OPD) doctor, Ms Samarasinghe, the police had issued instructions to not admit any casualties to the hospital.

Mr. Mohammed told CMEV that Beruwala Police OIC Duminda Rajapaksha refused to provide the former president with security from the outset. However, the OIC told CMEV that he had provided a 40 -man squad for this purpose.

Ms Premachandra confirmed the above incident and blamed it on the inactivity of the Police and Special Task Force.