The Free Media Movement (FMM) of Sri Lanka today ( 16th Dec 2014) handed over its short term proposals for re-establishing freedom of expression rights in Sri Lanka. The document says that ‘Free Media Movement expects to bring forth long term proposals related to Freedom of expression rights Sri Lanka to be implemented by the proposed national Government after the Hundred-Day-Reforms under the new President. FMM hopes to formulate and submit such set of proposals in collaboration with other media and civil society organisations in Sri Lanka.’

Short term proposals submitted by the Free Media Movement to to the common opposition and its presidential candidate .

Free Media Movement has already expressed its support to the common opposition candidate, Mr. Maithripala Sirisena, who will be contesting at the upcoming presidential election with a mandate to abolish executive presidency, reinstate the 17th Amendment, establish an electoral system more suitable and provide concessions to economic difficulties being experienced by people; these measures are included in the First Hundred Days Programme of the Common opposition.

The Free Media Movement is also a signatory to the Memorandum of Understanding signed with common presidential candidate, Mr. Maithripala Sirisena.

Over the past several years freedom of expression rights in Sri Lanka has been on a steady decline. The Free Media Movement has repeatedly requested the present Government led by President Mahinda Rajapakse to protect freedom of expression rights of all Sri Lankans which is based on people’s right to information. However, since our requests have been completely neglected by the Government headed by the President, Free Media Movement does not think that another plea to Mr. Rajapakse, who is contesting for the third term, will bring any result.

Therefore, Free Media Movement submits following short term proposals to the common opposition and its presidential candidate Mr. Maithripala Sirisena to be implemented within the first hundred days of winning the presidential election in order to ensure media freedom in the country to some extent.

1. Freedom of Information
Enforce the Freedom of Information Act approved by the Cabinet of Ministers under Prime Minister Ranil Wickremasinghe in February 2004 as aninitial and symbolic gesture to express the respect for people’s inviolable right to freedom of information which is recognised by the United Nations Declaration of Human Rights and the Constitution of Sri Lanka. In this regard, Free Media Movement further requests the interim government of common opposition to work in collaboration with Sri Lanka Press Institute, which represents journalists’ associations, Newspaper editors and media proprietorsand relevant civil society organisations.

This step will be a due recognition of the various campaigns carried out by the media community and civil society groups in defence of people’s right to information. 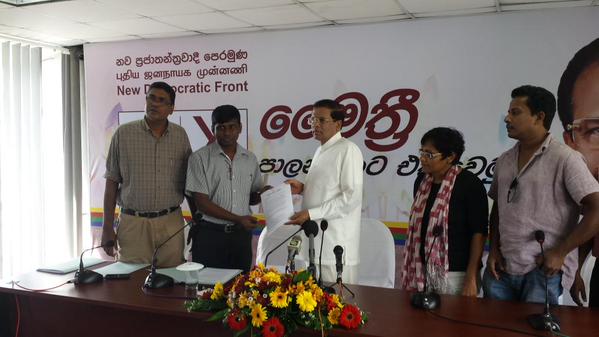 2. Abolishing Impunity
Human Rights Commission of Sri Lanka (HRC-SL) which should be transformed to an independent institution after reinstating 17thAmendment should immediately initiate investigations in to killings of and attacks on journalists and media institutions during the last ten years; for this purpose a special division of Human Rights Commission should be established with necessary infrastructure and financial allocations. The HRC- SL should be allowed access to information already collected regarding such incidents by the state intelligence services.

3. Independence of Media
People’s right to information could only be realized through the existence of a media culture which is ethical, truthful, fair and diverse. In this regard, as a symbolic and initial step, state controlled print and electronic media should be de-politicised and should be transformed in to public service media.It should be ensured that the state controlled media precisely follows the recommendations and guide lines of the Commissioner of Elections at the general elections to be held following constitutional reforms.

4. Abolishing Censorship
It is a known fact that over the past years Sri Lankan media drowned in a formidable self-censorship. At present investigative and truthful reporting has become an invitation to death-threats. As a symbolic and immediate step towards changing this situation, all websites officially and unofficially censored by the present Government should be lifted.

In case of unwillingness to associate with the PCCSL FMM requests those news media to establish their own self-regulatory mechanisms.

Free Media Movement expects to bring forth long term proposals related to Freedom of expression rights Sri Lanka to be implemented by the proposed national Government after the Hundred-Day-Reforms under the new President. FMM hopes to formulate and submit such set of proposals in collaboration with other media and civil society organisations in Sri Lanka.

On behalf of the Free Media Movement

[This is a translation of the original Sinhala document]