Dr. Paul Newman is a Professor of Human Rights at the University of Bangalore, India. He is one of very active intellectual form India, Who are very concerning about Tamil Nation Issue in Sri Lanka. He was express his views about Sri Lanka’s Presidential Election in 2015.

Q – Sri Lanka presidential election is around the corner, in your opinion how important is this election to Tamil people in the Island?

Paul – The Tamils have suffered since the independence of the erstwhile Ceylon, we must not forget how the Tamils living since 1824 were disenfranchised. They have virtually lost any hope in the south led politics of Sri Lanka as they have been failed time and again in finding a just political solution. The present regime is not just anti-Tamil, it is anti-people. More than any other previous regimes this regime has caused the most damage to the Tamils by conducting a well-planned Genocide on the Tamils, which the Tamils cannot forgive and forget. There is not a single Tamil family in the North and East that has not been affected by this Genocide. It is in this background, that this election will be a decisive factor in determining the political future of the Tamils.

Q – Some Tamil groups in Sri Lanka and abroad wants Tamils to boycott the election? Will such strategy be helpful for Tamil struggle for justice and equality? 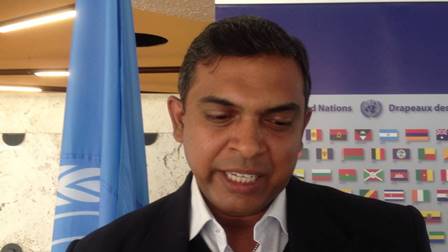 Paul – The Tamils constitute 15% of the electorate and can be the most decisive factor. Boycotting the elections will send wrong signals to many in the International Community who feel a regime change will reduce the miseries of the Tamils. Having said that one must also understand the frustrations of the Tamils. The Tamils are not even allowed to mourn their dead, every Tamil village is a virtual army camp, the Tamil women are perceived as the property of the soldiers, no meaningful development or reconciliation has taken place. The boycott of the 2005 elections proved to be counterproductive as the man who came to power virtually eliminated the Tamil existence in the island. Tamilnadu is a good example of this kind of a situation. In the 2011 elections, the people had to decide between the dynastically corrupt regime of M.Karunanidhi against Jayalalithaa, whose previous rule too had witnessed unprecedented levels of corruption. The people chose the lesser evil as they felt Jayalalithaa as a single person was bearable than the dynastically corrupt M.Karunanidhi.

Q – Joint opposition’s main campaign focus seems to be on South, other than promises on governance and rule of law; there are no specific promises to address the Ethnic question? How do you look at it?

Paul – The main opponent of MR was a person who had approved all the policies of MR and there would not be a major shift in the policy with regard to the Tamils, which makes the Tamils to think on different lines and the purpose of this election which is not going to serve their polity. No meaningful development can dawn the island unless there is democracy enjoyed by all sections of the society. You may remember every country in Asia looked upto Sri Lanka to be a model till the outbreak of ethnic violence. The root causes for the ethnic conflict has to be addressed for bringing about any meaningful economic development. If you are a real leader you must be the leader of all the people not just the majority ethnic group.

Q – Tamil politics in the Island has taken drive towards isolationism, cutting it away from the national political issues, is this right direction?

Paul – Tamils were never considered to be part of the national political discourse, the isolationism was not started by the Tamil leaders but by the Sinhala leadership cutting across party lines, treated the Tamils as aliens. Unless the Sinhala politicians accept the Right to Self Determination of the Tamils it would be unfair to expect the Tamils to join the mainstream national politics. It is a sad fact that the Sinhala politicians too with the exception of people like Comrade Siritunga Jayasurya and Dr.Wickramabahu Karunarathne have never tried to heal the wounds of the Tamils. They know that if they try to win the hearts of the Tamils, there would a backlash amidst the Sinhalese,they have been using the Fascist and Nazi ideology of appeasing the majoritarian community by pointing the minorities as villains in the process of nation building. Once these anomalies are corrected, I am sure the Tamils will join the mainstream as a healthy practice.

Q – Finally what do you expect in both scenarios of Rajapaksa or Sirisena winning?

Paul – If MR wins, it would be a disaster to the entire country which I feel would move towards a totalitarian dictatorship. He would project to the outer world that it is a referendum against the UN initiated OHCHR Investigation on Sri Lanka (OISL). The Sinhalese need to understand that though the war was declared over in May 2009, the budget has witnessed a dramatic increase in defense spending with an unprecedented rise of 25% on an average annually though Sri Lanka does not have any external enemies. This is because of the kickbacks the ruling class gets as a result of the arms deals. On the other hand MS will be no different as he was in the same camp till a month ago. The only positive would be the elimination of the family rule and return of governance and establishment of the rule of law.