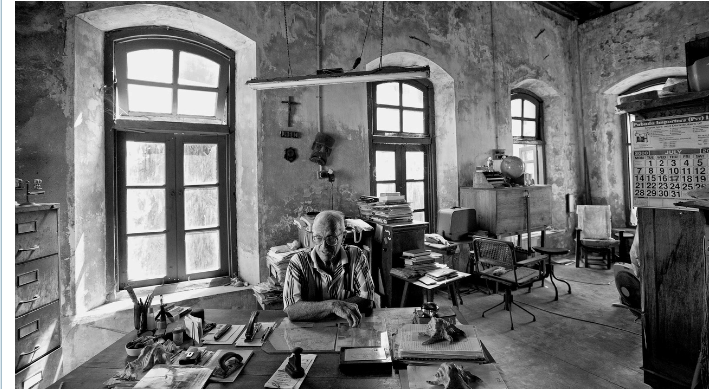 [Batticaloa is my home – Fr. Miller in his study in Batticloa: see Video  ]

This year the National Peace Council (NPC) has decided to give its Citizens Peace Award to Fr Hanry Miller. The awards ceremony will be held on Saturday November 8 at 3 pm in Batticaloa.

Fr Miller, who devoted his life to well being of people of Battiicaloa, is US citizen. NPC says that it also wanted to give a message that it appreciate the role of the international community in ensuring that human rights are protected in Sri Lanka.

During a period of time spanning over fifty years during which period he served as Rector of the St. Michael’s College and as a teacher, Rev Father Benjamin Henry Miller saw many opportunities to become involved in civic organizations. He helped in the formation of an inter-religious organization, in civil societies to combat tuberculosis and cancer through preventive education, the establishment of a branch of the Federation of Red Cross, and as a Rotarian, he served as its President as well as on the National Rotary Council for Peace and Harmony.

The National Peace Council hereby honors his work with the Batticaloa Peace Committee (BPC) which began as a group of concerned citizens and gave advice on legal procedures surrounding detention and how to find those in detention. They took up these cases with the authorities, publicized the cases where it might help, and shared the information with international human rights organisations, diplomats, journalists and NGOs. In recognition of their non-partisan role, the security forces gave BPC the role of conduit to hand-over released prisoners. The BPC was often called to prisons or courts to pick up released prisoners and the BPC was also named as next-of-kin when there was no next-of-kin available to receive the arrest of new detainees.

During the period of Ceasefire in 2002 and until its breakdown, the government appointed him to be its nominee for the Sri Lanka Monitoring Mission for Batticaloa. As the Founder member of the Batticaloa Peace Committee (BPC), Fr Miller showed himself to be a fearless human rights activist who encouraged and strengthened civil society in Batticaloa to take up the cause of the victims of human rights abuses committed by the Sri Lankan security forces and several other militant groups, including the LTTE.
It is inspiring to us that although born in the United States of America, Fr Miller chose to come to Sri Lanka, and make its people and their sorrows his own, and commit himself never to leave them in their time of need. Accordingly the National Peace Council is pleased to present Father Harry Miller with its Citizens Peace Award for 2014 for long years of commitment and leadership in working for Human Rights, Social Justice and Peace in Sri Lanka. 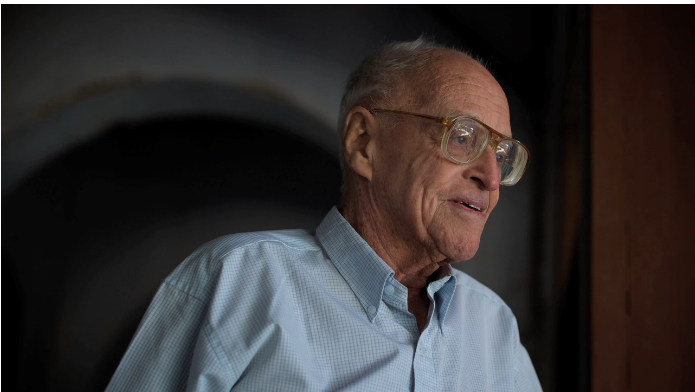 On a recent quiet afternoon as a breeze began to blow through the large windows of his office located in the attic of St. Michael’s College, Father Henry Miller looked back on a life-time in Batticaloa.”I have been able to do things that no one would dare to do; I could go and raise a clamour and I’ve done that many times,” he mused from behind his desk, littered with pencils, sea shells, and rusty staplers.

For over six decades, Father Miller has acted as priest, protector, educator, and witness to generations of Batticaloans. On Sunday, he left Sri Lanka to return home to New Orleans, Louisiana in the United States for a six month extended leave. He said he has not decided whether to return.

“It’s reached a stage now that there is no structure through which I can make a difference. There was a time when I could write a letter to the president or assemble senior police officers. None of those things would make a difference now.”

In addition to what he sees as the shrinking sphere of his influence, Father Miller said there is also his advanced age to consider. When he arrived in Sri Lanka at the age of 23, it was by ship and the journey took one month. It was September 1948 and Sri Lanka had just months before celebrated its independence from colonial rule for the first time in over 400 years.

Now 84-years-old, Father Miller sometimes asks children at St. Michael’s which of the four houses named after Jesuit Fathers they belong to.

“Miller House!” some respond.
“Who’s Miller?” he asks them, curious.
And they shrug their shoulders.

But Father Miller’s contributions to the people of the Eastern Province are hardly forgotten by all. In the week leading up to his departure, a steady stream of visitors arrived at his office door to bring gifts and best wishes for a safe trip, but also pleading with him to return as soon as possible.

“It’s very sad,” said one. “I told him to come back quickly. We need him here.” Father Miller was born and raised in New Orleans to a devout mother and father who raised their children to attend Mass daily. Indeed, throughout his junior education, Father Miller said he attended Mass twice every morning, once with his family and once when he reached his Jesuit school.At the age of 16, he decided that he wanted to join the order, a decision that followed in the footsteps of his older brother. In all, six of his seven siblings would become Jesuits or nuns. “My other sister called herself the ‘white sheep of the family’ because the rest of us wore black clothes,” he said with a chuckle.

Upon joining, Father Miller became the youngest in the class but the decision, in spite of his youth, was final. “No one joins the Jesuits and doesn’t say, ‘This is for life,'” he said. He studied for seven years and received a degree in physics before volunteering to be sent abroad.

At that time, the French Jesuit numbers in the East of Sri Lanka had been depleted by two world wars and the Vatican had requested the New Orleans Province to help fill the ranks and aid in operating the dozens of schools in the area. Father Miller was among five Jesuits who were placed in Batticaloa.
He taught physics, English, history, and coached the soccer team, whose offense consisted of Tamil and Muslim forwards, Burgher midfielders, and Sinhalese wingers. “There were no signs of war in 1948, nobody fighting against anybody else,” he said.

From 1959 to 1970, he acted as rector of the school and shortly after he stepped down from the position, the government took over the administration and curriculum.

Around the same time, Father Miller became instrumental in setting up forums for community leaders and religious figures to engage in dialogue with one another, eventually helping to start a peace committee. As the conflict and its effect on the people of the Eastern Province worsened, he also became a repository for thousands of human rights abuses and disappearances.

“What I have been able to do is, at least on the part of Jesuits, is put forward a full picture of what the people need here,” he said looking back on his work. “Understand the thinking between them, the gross grievances. But bridging that gap, no one has done it yet.”

By 1990, only two of the original five who travelled by ship from New Orleans to Colombo were left in Batticaloa, Father Miller and Father Eugene John Hebert. But that year, during a rescue attempt of priests and nuns in Valachchenai–where Tamils feared Muslim retaliation over recent massacres–Father Hebert disappeared. He was believed to have been killed by a rioting crowd outside Batticaloa.
“I suppose I could have left at that time,” Father Miller said. “But I just figured I was here for life.”

These days, Father Miller seems to have undergone, if not a change of heart, then a realization that times have changed even from the stark days of the early 1990s. “I don’t see anyone on the horizon who I can talk to, to get anything done. Meanwhile, people continue to disappear, rights are more and more eroded, and there is no sign of improvement. So, I think, maybe I need a holiday.”
http://www.sundaytimes.lk/090322/News/sundaytimesnews_00200903219.html
————–