HomeInternationalNewsEven If People Are Willing, The Incumbent President Is Disqualified To Be Elected For A Further Term 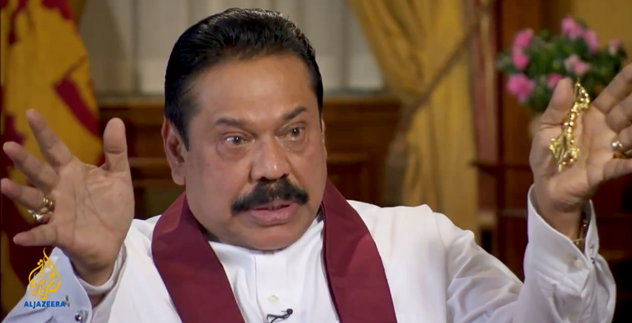 By H.K. Seneviratne, LL.B, Attorney-at-Law–
A way out from the constitutional impasse
Former Chief Justice Sarath N. Silva setting forth an argument that constitutional obstacles do exist for the incumbent President to contest for a third term notwithstanding the removal of two term limit of presidents made on 9 September 2010 by way of the 18th Amendment to the Constitution has gripped the political and legal circles in perplexity over the issue.
As opposing opinions have emerged over time, the Sri Lanka Bar Association in considering the importance of the matter has decided to seek an opinion from a legal expert of an international repute over the issue.

The 1978 Sri Lankan Constitutional position before the 18th Amendment was reflected in Articles 31 (2) and 31 (3A) (a) (i) as follows:
(i) Paragraph (2) of Article 31 – “No person who has been twice elected to the office of President by the People shall be qualified thereafter to be elected to such office by the People.”

This Ordinance was at first enacted in 1901 but following the subsequent amendments thereto, in section 2 goes on to define the term “enactment “ to mean “ any Ordinance , Law or Act enacted by Legislature of Ceylon or Sri Lanka ,as the case may be, including the Constitution of the Democratic Socialist Republic of Sri Lanka of 1978.

This means that the Interpretation Ordinance, by subsequent amendments thereto, had been endowed to make it available in defining the meaning of certain relevant items and shortening the language used also in the Constitution of 1978 which is the fundamental law of the country. This makes it rightful to have recourse to the Interpretation Ordinance to examine the effect of the repeal and/or substitution of any provision in the Constitution like in any other written law of the country.

The Interpretation Ordinance in dealing with the “effect of repeal or expiration of written Laws” in section 6 has to say the following:

“6 (1) whenever any written law repealing either in whole or part a former written law is itself repealed, such repeal shall not, in the absence of any provision to that effect, revive or be deemed to be have revived the repealed written law, or any right, office, privilege, matter or thing not in force or existed when the repealing written law comes into operation.”
We have noted what the 18th Amendment to the Constitution does to paragraph (2) of Art. 31 was an unqualified “repeal of paragraph (2) of Article 31” in the absence of any expression in qualification or amplification to the said repeal.

The corollary of such eventuality is explained in section 6(3) of the Interpretation Ordinance to state that wherever any written law repeals either in whole or part a former written law, such repeal shall not, in the absence of any express provision to that effect, affect or be deemed to have affected (a) the past operation of or anything duly done or suffered under the repealed written law, etc.

Thus, in view of the unqualified, stand alone repeal of paragraph (2) of Article 31 (and in the absence of any other statement to that effect), it is lawfully consider that such repeal shall not affect or deemed to have affected anything suffered under the past operation of the repealed law.

The incumbent President was elected for his second term in January 2010 and the 18th Amendment was brought on 9 September 2010 after the President had subjected and had suffered from the disabilities under the repealing provision.

In sum and substance, at the time the repeal of paragraph (2) of Article 31 was effected by the 18th Amendment (on 9 September 2011), the incumbent President had already been elected twice to the office of President, and was impregnated with the disability pursuant to past operation of the then existed paragraph (2) of Article 31 and therefore would be precluded to be elected for a further term of office by the people. The 18th Amendment has failed to provide any express provision to waive off the disqualification suffered by the incumbent President pursuant to the unqualified repeal of the past written law.

In view of the above legal impasse attached to the incumbent President, he is also disentitled under the amendment brought in to paragraph (3A) (a) (i) of Article 31 (also by the 18th Amendment) to make a Proclamation made at any time after the expiration of four years of his current term of office and declare his intention of appealing to the people for a mandate to hold office, by election, for a further term.

Interestingly, although the incumbent President, by operation of the law, is suffered from the disqualification to seek to be elected by the people for a term beyond two terms, there is no such restraint on any future president being benefited by the complete removal of limitation to the terms of office of Presidency by virtue of the 18th Amendment if the people are willing. But due to the above legal holdup, even if people are willing, the incumbent President is disqualified to be elected for a further term by the people at the expiration or before the expiration of his second term.

If the expectation of the 18th Amendment was not the same, a wise and more legitimate way out would be to waive off the legal impasse by a further amendment to operate retroactively, enabling for third term of presidency.

The good example of ex post facto criminal legislation was The Offence against Aircraft Act of 1982 passed by the Parliament pursuant to Art. 18 (6) of the Constitution to incorporate international criminal law of hijacking of planes into Sri Lanka domestic law to convict Sepala Ekanayake of a crime that was not a crime in Sri Lanka at the time of the hijacking. Thus the Constitutional limitation is only for the enactment of ex post facto criminal statutes.
FT