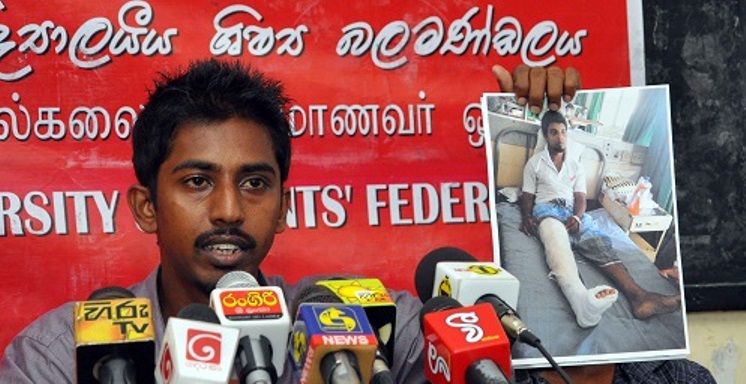 The Inter-University Students Federation (IUSF) at a media briefing alleged that 10 students who were beaten during a protest-march yesterday (21 Oct)  have been hospitalized.

Convener of the Federation Najith Indika said the students were receiving treatment at the Kalubowila Teaching Hospital and the Colombo National Hospital. He charged the police of deliberately injuring students.

Police Media Spokesman SSP Ajith Rohana was quoted by local media as saying the students were posing a threat to the on-going parliamentary sessions and that police had to resort to fire water cannons and tear gas.

Students of the IUSF engaged in demonstration yesterday near Parliament road over private universities among other issues.

Tags: Education rights, Human Rights, Right to peaceful assembly, rule of law, Sri Lanka
Previous post Meet “Sweetie” — The Online Predator’s Worst Nightmare
Next article We Need to Have a Track of All foreigners, Who Go to North - SL Military