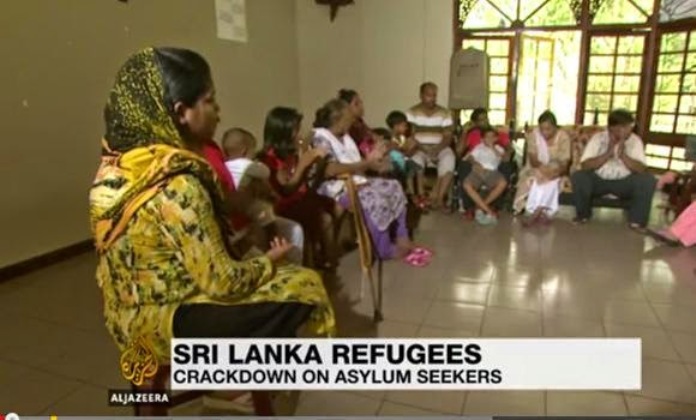 It is also true that Sri Lanka is not a signatory of the 1951 UN Refugee Convention. However, Sri Lanka cannot legally send refugees back to torture or worse.

A Sri Lankan court has granted the government permission to start deporting Pakistani minority refugees from the country, going back on its earlier decision to hold back after Sri Lank cited increases in the disease and crime rate of the country as a result of the influx of refugees. According to the Sri Lankan authorities, the spread of malaria and a jump in the stats of petty crime is forcing their hand. But the Sri Lankan government’s revelation comes months after the initial arrest sprees, in which hundreds of refugees were put behind bars without access to UNHCR representatives or medical aid.

Roughly 1800 refugees were seeking shelter in Sri Lanka, with as many as 1500 of them from Pakistan, belonging to minority groups such as Christians, Shia Muslims and members of the Ahmadiyya community, all of them, suppressed, marginalized and attacked, and the last of which have been slaughtered without any pretence ever since they were declared non-Muslims. There is no denying that the increase in refugees in Sri Lanka has been exponential, and the government’s claim of a 700 percent increase might not be too far off the mark. It is also true that Sri Lanka is not a signatory of the 1951 UN Refugee Convention. However, Sri Lanka cannot legally send refugees back to torture or worse.

And still, over 108 people have been deported back to Pakistan between August 1st and 14th. Foreign Office Spokesperson, Tasnim Aslam’s despicable statement disowning all those who had left Pakistan without showing even “a trace of shame” at their persecution and the state’s inability to protect them does not mean that the lives of minorities should be trifled with. With both the Sri Lankan and Pakistani government’s indifference, the UNHCR cannot stand by helplessly as it has done on so many occasions. There is a legal basis for the protection of innocent lives that have no homeland. The Sri Lankan government’s assertions should be ignored and the refugees languishing in their prisons must be released and processed in the interests of their most basic human rights.
The Nation Editorial