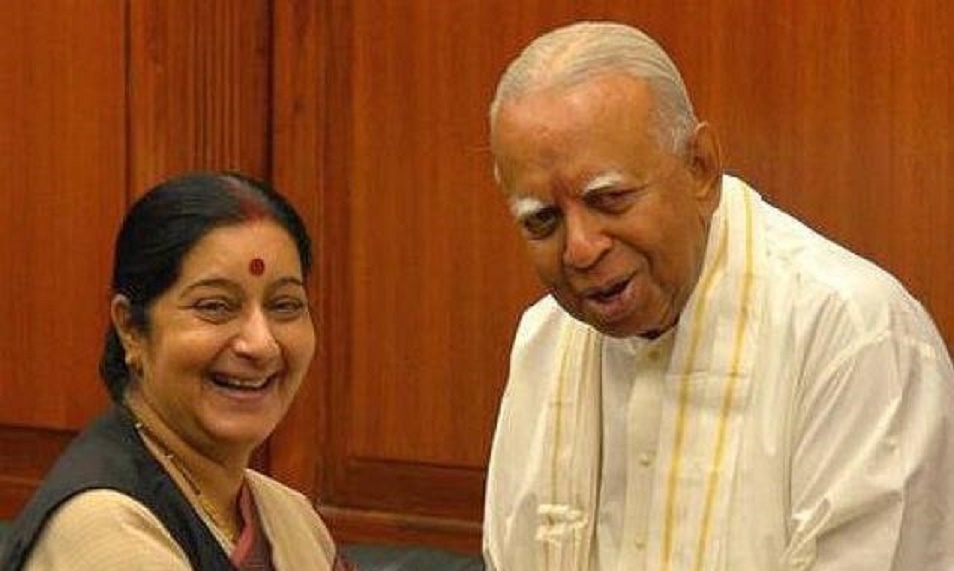 “She [Sushma Swaraj] stressed the need for a political solution that addresses substantially, the aspirations of the Tamil community in Sri Lanka for equality, dignity, justice and self-respect within a framework of a united Sri Lanka,” the ministry spokesperson Syed Akbaruddin said during a weekly press briefing on Friday.

“This is the first delegation of the TNA to visit India after the new government of India has taken office. Obviously this is part of our effort to engage with all – the government of Sri Lanka as well as all political parties in Sri Lanka, with the ongoing process of reconciliation,” India’s external affairs ministry spokesperson said.

“The TNA delegation made a presentation to the external affairs minister in a fairly detailed manner about what they perceive as the current situation in Sri Lanka in terms of the political environment and their engagement or otherwise with the Sri Lankan government,” he added, stating that the delegation is due to meeting Prime Minister Modi on Saturday where “they intend to put forward a detailed projection of their understanding of the situation as well as suggestions that they may have in this context about Indian engagement on this issue.”

The spokesperson also said there “was a discussion about the Indian developmental projects in the region, including in the Northern and Eastern provinces of Sri Lanka. This included the housing project, as well as hospitals and various other projects, including reference to the Sampur thermal projection also.”

Asked by a reporter to clarify what a “substantial solution” meant, the spokesperson said: “the 13th Amendment was stemming from the India-Sri Lanka Accord, and that is something that the Sri Lankans themselves have adopted as their legislative framework and that’s the framework in which we are working.”

Speaking after the meeting with Swaraj, Sampanthan said the TNA delegation had stressed to the minister the importance of India’s role in resolving the ethnic conflict on the island.

“They [people who live in Sri Lanka] have their roots in India. Their culture is Indian and everything is Indian. So, I think India is one country that can play a major role,” Sampanthan said after the meeting.

The delegation comprising 6 TNA MPs held discussion on various issues and complained about the alleged attempts by the Sri Lankan govt. to change the democratic composition of the Northern Province

A delegation of Tamil National Alliance (TNA), which rules Jaffna Province of Sri Lanka, on Friday called on External Affairs Minister Sushma Swaraj and said India can play a major role in resolving the ethnic Tamil problem in the island nation.

“They (people who live in Sri Lanka) have their roots in India. Their culture is Indian and everything is Indian.

So, I think India is one country that can play a major role,” he said.

The delegation comprising six TNA MPs held discussion on various issues and complained about the alleged attempts by the Sri Lankan Government to change the democratic composition of the Northern Province.

“We have explained the position currently prevalent on the ground in the north and the east… The difficulties people are facing, the aggressive programme implemented by the Sri Lankan Government to change the democratic composition of the northern and eastern provinces and the cultural and linguistics identity of the areas,” he said

Accusing the Sri Lankan Government of being not interested in any political solution, Mr. Sampanthan said steps have “not been taken to implement the 13th amendment for devolving powers to the Tamil minority“.

“We have also talked about various other matters that are of concern of Tamil people and requested that some action can be taken by India. India should be pro-active in dealing with these questions,” he stressed.

The delegation’s meeting with Ms. Swaraj was cordial, he said, adding the MPs are meeting Prime Minister Narendra Modi on Saturday.
The Hindu