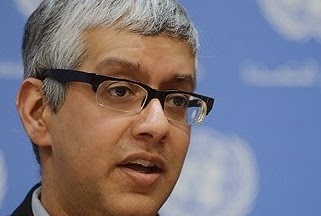 Farhan Haq The United Nations (UN) says it will study a warning issued by the Ministry of Defence (MOD) to Non-Governmental Organisations (NGO) not to go beyond their mandate. Farhan Haq, Deputy Spokesman for UN Secretary General Ban ki-moon, said that the UN will need to evaluate the warning and then make a statement. An MOD letter sent to NGOs notes that some of them conduct press conferences, workshops, training for journalists, and dissemination of press releases which is beyond their mandate. “We reiterate that all Non Governmental Organizations should prevent from such unauthorized activities with immediate effect,” the letter said.Some NGOs have raised concerns over the letter issued by the Ministry of Defence. (Colombo Gazette)
Tags: Freedom of expression, NGOs, Right to association, UNO
Previous post Sri Lanka: MOD warning to NGOs: MOD has overstepped its mandate
Next article Club de Madrid calls to stop clashes between Muslims and Sinhalese in Aluthgama & Beruwala