HomeFeaturesMahinda before fire in the North 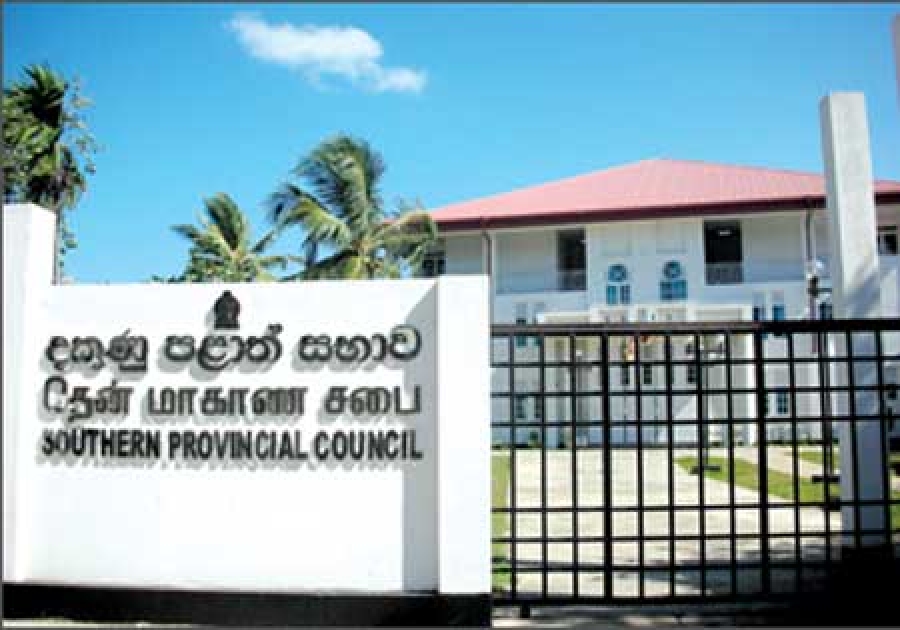 Mahinda Rajapaksa’s role in establishing opposition PC in the South
When former President D.B. Wijetunga met people at his retirement home in Kandy, he used to say that his engagement with the Southern Provincial Council was a folly. UNP was never strong in the South. The UNP strategy at the Southern Provincial Council election finally paved way for Chandrika to come to power. But Wijetunga did not understand it at that moment. In warfare also it is advised to lure the enemy into a field in which you are strong. It is always foolish to engage with the enemy on the ground where he is strong.

President Mahinda Rajapaksa is now sharpening his swords to engage with the Northern Provincial Council and commit this fault. He has pushed the Northern Provincial Council Chief Minister on to the warpath by rejecting his appeal to change the Governor. Wigneswaran has now vowed to resign from the Chief Minister position. This recalls the incident of Opposition Leader A. Amirthalingam and the other MPs of Tamil United Liberation Front (TULF) resigning from Parliament protesting against the 6th Amendment to the Constitution banning the talks about a separate State, which was brought after the 1983 Black July. This resignation paved way for the Tamil armed groups to become powerful.

Mahinda himself has the best experiences of political anguish an elected Chief Minister feels when the people’s mandate he won is ignored by a Governor. He was highly instrumental in ending the political game played by the Governor of the Southern Provincial Council in 1993 denying the People’s Alliance, which had the majority in the Southern Provincial Council the opportunity to form the rule. Following is an excerpt from his biographical sketch Kurahan Satakaya:

Pada Yathra
By then, Mahinda Rajapaksa had held the Pada Yathra march and shaken the Premadasa Government, which was believed to be unshaken. Premadasa dissolved the Southern Provincial Council and held an election after the Pada Yathra. The UNP, which held power in the Southern Provincial Council won 26 seats and People’s Alliance won 27 seats together with three seats won by Lalith Athulathmudali’s party.

Former Chief Minister, Dodangoda, recalled how Mahinda Rajapaksa fought with determination against the UNP’s attempt to keep the Southern Provincial Council in its hold.

“After the judgment was delivered, the Governor vanished. We did not have a Governor to swear in. When we looked for him, we came to know that the Governor was hiding in an estate belonging to him, situated in Matale. I met him with several others at the Matale estate. He was wondering how we found him.

“I proposed to Governor Bakeer Markar to swear-in then and there. He said it could not be done there because that day was a holiday. He said he would be in the Governor’s bungalow on Monday and asked us to swear-in there. We agreed with him and returned home.

“But we had doubts if the swearing-in on Monday would be a reality, after all these troubles. As expected, the Galle Dutch Fort was heavily guarded since Sunday.

“The Governor was to arrive in Galle Fort on Monday but apparently it was unlikely for a swearing-in to take place.”

“We understood that we would not be allowed to reach Galle Fort the next day. Their plan was for the Governor to be present in office that day but nobody was to be allowed to meet him to take oaths. They planned to announce that the Governor was waiting for the swearing in but postponed the forming of the government as they had not appeared. They were conspiring to buy one Councillor to their side and break the majority of the People’s Alliance. I spoke to Mahinda Rajapaksa that night and said that police was blocking people’s access to Galle Fort. I asked him to be present with us for the swearing-in.”

“It was like people of the entire Southern Province were flowing into Galle and the city was overcrowded. Police had blocked the entrance to Galle Fort. MPs Richard Pathirana, Mahinda Wijesekara and Mangala Samaraweera were also there.

“I asked all the Councillors elected from our party to gather in the Buddhist Centre of Minuwangoda. We had planned to travel in one bus to swear-in before the Governor. Mahinda Rajapaksa came on time. He drove his jeep before the bus up to Galle Fort.

“There was a huge barrier before Galle Fort. Police sent back all who attempted to enter Galle Fort.
“Mahinda got down from the jeep while we stayed in the bus. Police and Army personnel were waiting to prevent them entering the Galle Fort.”

Former Provincial Councillor, Danny Hiththetiya, was eyewitness to the next series of happenings.
“SSP Lawrence stopped Mahinda. “He said that nobody could be allowed to enter according to the orders he had received.

“Mahinda said he was a lawyer and he wanted to go to the Court in Galle Fort.

“SSP screamed that he could not allow him to proceed.

“His tone and the tight security around the Fort indicated that we would not be allowed. There was a barrier blocking the entrance to the Fort.

“Mahinda pushed the SSP, toppled the barrier and asked the Councillors in the bus to get down and come with him.”

Dodangoda described the happenings from then onwards.

“The SSP could not imagine what to do. As he clung onto the coat Mahinda was wearing, he brushed him aside and ran into the Fort with us. We ran very fast to the office of the Governor, which was 400 metres away from the entrance to the Fort.”

Dullas joined to describe the happenings from then on.

“The doors of the Governor’s office were closed. Mahinda Rajapaksa kicked the door. The door broke open with several kicks and the Governor and his secretary remained in the office terrified.

“Mahinda shouted aloud that the Councillors had come to swear in and asked him to proceed with it. Governor Bakeer Markar asked us to go to the hall on the ground floor. Mahinda said we were not ready to go here and there and asked to carry out the swearing-in right there.

“Governor Bakeer Markar was stunned and arranged the swearing-in at once.

“Mahinda took the first paper and read it aloud stating that Amarasiri Dodangoda was taking oaths as the Chief Minister. The Governor who had no escape signed the paper.”

That was the way the People’s Alliance formed the administration in the Southern Provincial Council. Mahinda Rajapaksa proved that the Premadasa regime could be toppled through these brave acts, said Amarasiri Dodangoda.

The same Mahinda, who then clashed with a Governor to safeguard the people’s mandate, now appears for a Governor to our dismay. Wijetunga committed a folly through his attempt to cling to power in the Southern Provincial Council ignoring the people’s mandate. It was the South and this is the North. The North is not like the South. The entire world is looking at the happenings in the North. LTTE-led Tamil Diaspora is in need of taking Wigneswaran out. They have been planning to hold Gandhian style hartals in the Northern Province since then. When the Army is deployed to suppress these hartals, there will be clashes. If Tamil people are killed in these clashes, the international community can rationalize their engagement in safeguarding the Tamil people.

Wijetunga played with water in the South. But Mahinda is before fire in the North
Ceylon Today