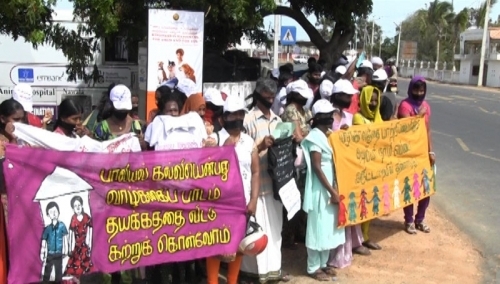 People in the area wants justice for the crime [Photo: Tamil gaurdian]

The brutal gang rape of 13-year-old girl and severe sexual abuse of 9-year-old girl have been medically established by the Judicial Medical Officer (JMO) attached to the Jaffna Teaching Hospital, informed legal sources in Jaffna told TamilNet Thursday. The girls have also stated that they were abused by Sinhala-speaking blue-uniformed men who took them to an abandoned building and subjected to the cruelty, the legal sources further said adding that the Sri Lankan judicial system was under heavy pressure from the SL military and the sources close to the SL Defence Secretary and SL presidential sibling Gotabhaya Rajapaksa not to indict the SL Navy personnel who were involved in the heinous crime.

The physical injuries suffered by the first victim have established repeated vaginal penetration by the abusive SL navy men. The girl has injuries also in other parts of her body, the sources that have access to the medical report said.

The girls were studying at Suntharamoorthy Naayanaar School at Kaarai-nakar and belong to families below poverty line, news sources said. In recent time, the number of pupils attending the school had gone sharply down.

The 13-year-old girl revealed the abuse of the 09-year girl, news sources from Kaarai-nakar said.

There are widespread allegations of sexual abuse committed by the Sinhala sailors at Kaarai-nakar at the said locality.

Poverty and malnutrition have been reported at Oori, the village close to the SL Navy base, where the abused girls live.

NPC Councillor Ananthy Sasistharan who visited the village said there was no potable water at the village of Oori and NPC Minister of Agriculture P. Aingaranesan has arranged for temporary supply of potable water, the news sources further said.