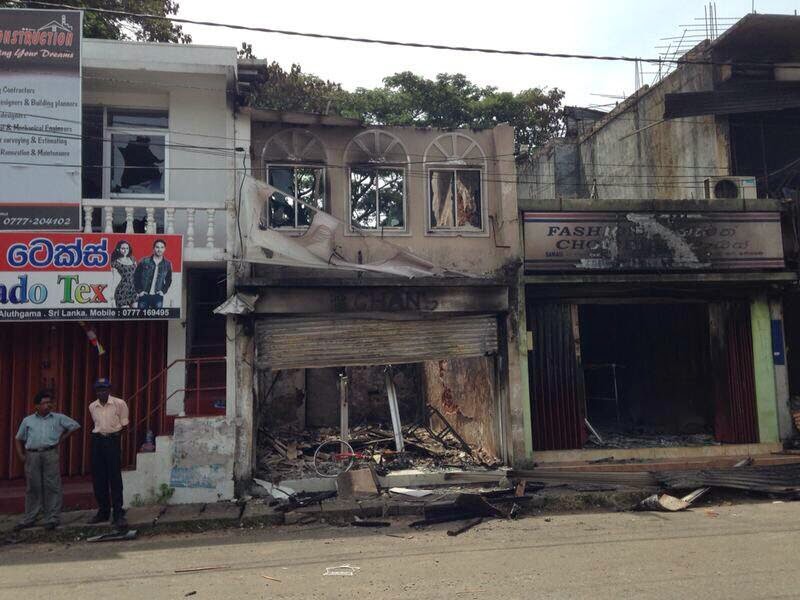 World Socialist Web Site reporters this week visited the Sri Lanka coastal town of Aluthgama, 60 kilometres from Colombo, where Buddhist extremist thugs have attacked the Muslim community. The communal violence was whipped up by an anti-Muslim meeting organised by Bodu Bala Sena (BBS), or Buddhist Brigade, in Aluthgama on June 15. BBS secretary Galagoda Aththe Gnanasara, a Buddhist monk, made a venomous speech against Muslims, declaring it would be the “end of them if any of them laid a finger on any Sinhalese.” After the meeting, mobs went on the rampage, looting and burning Muslim-owned houses and businesses, killing two Muslims and a Tamil, and injuring around 60 people. The thugs continued their violence while security forces deployed by the government looked the other way.
When the WSWS reporting team visited the area, armed police commandos and other police could be seen patrolling. There were houses burnt to ashes, broken windows, ruined TV sets, damaged domestic appliances and furniture, and burnt-out vehicles. People were still fearful and angry. We spoke to families outside their damaged and destroyed homes in Seenawatta, one of the worst affected areas. 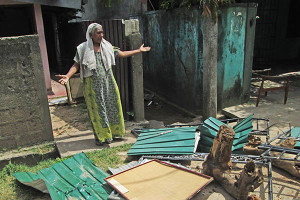 Hidaya outside her damaged home
Explaining her predicament, Mohamed Hidaya raised both hands to the sky. “See what they have done,” she said. “For nine days we spent the nights at the Jumma Mosque in fear of our lives. We came back in the day time to salvage what little is left here.”
After the first attack on June 15, she explained, Sinhalese thugs made three further attempts to attack Seenawatta, where the Sinhala and Muslim communities have long lived together. Some Sinhala residents intervened to protect their Muslim neighbours from the mobs. However, on following day, the thugs managed to burn down several Muslim houses.
Hidaya, a cancer patient, has lived in Seenawatta since 1981 with fellow Sinhala villagers without any trouble. She had never expected such an attack. When thugs broke into her house, she was alone. She was hiding behind the toilet praying, while they looted and damaged her house. 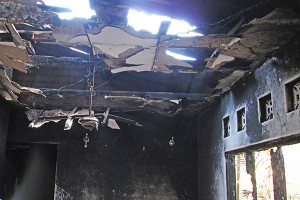 Fire damaged house
L.W. Fauzia, 48, a teacher at Dharga Town School, explained: “News came that a procession was coming and we hurriedly collected food [to serve the participants]. We saw a young crowd at the temple about 3 pm but thought they were devotees. A truck approached the temple and some crates and cans were unloaded. People started running away, saying stones were being thrown. We also ran away.
“Coming back, we saw our house in flames. This was an organised act. My son and I tried to douse the flames. In the night we went to the mosque and a Sinhala friend called to say that our house was being looted. The roadway to the village was blocked. We asked for police protection. They said they couldn’t help, as we were the culprits.”
Many Muslim children, including Fauzia’s son, are still not going to school out of fear. Only 15 percent of the teaching staff has reported for duty.
A young housewife pointed to empty patrol cans inside her house and explained how a Sinhalese neighbour prevented the torching of her house by snatching a box of matches from a thug. “I am so sure those mobsters are outsiders and not from the village,” she said. 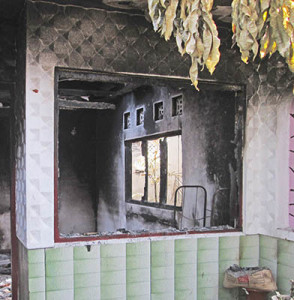 Burnt out home in Seenawatta
At the Jumma Mosque, representatives of a committee formed to look after displaced families, explained the situation. They said 1,256 people from 206 families are taking refuge in the mosque, including 70 infants, 285 children, 461 women and 430 men. Overall, 19 businesses and 15 houses have been completely destroyed and another 67 houses partially damaged.
A committee representative criticised the government for “not taking any measures to assist those displaced,” adding: “There are only two toilets in the mosque and those are now spilling over. Although the public health inspectors were informed, so far no redress has been provided.” The representative warned about the danger of a diarrhoea epidemic and complained that no government doctors were available, only private medical practitioners.
The two Muslims killed in the June 15 attacks reportedly died from head injuries. However, Justice Minister Rauf Hakeem, the leader of the Sri Lanka Muslim Congress (SLMC), has implied that both were shot dead by security forces and that government authorities are fabricating medical reports to hide what took place.
Hakeem told Ceylon Today on June 22: “I can produce evidence of used bullets where the two were injured. I went to the spot. The bullets weren’t fired by civilians. However, the autopsy report has indicated that the deaths were due to serious cut injuries. That is a preposterous situation if medical reports are being fabricated.”
As SLMC leader, Hakeem is under pressure from the Muslim community to defend its members. He initially threatened to resign from the government but backed away, claiming he could do more good inside the cabinet.
Yet President Mahinda Rajapakse and other government leaders have been busy whitewashing the role of the BBS in organising the anti-Muslim rampage and covering up their own patronage of the Buddhist extremist organisation.
BBS secretary Gnanasara is free to hold media conferences and events in Colombo and other cities, denying any connection to the June 15 attacks. On Tuesday, the BBS held an “Adishtana Puja” (a religious ceremony) at the Dalada Maligawa, or Temple of the Tooth, in Kandy where Gnanasara again denied any responsibility.
Gnanasara’s ability to roam around and make his false claims unchallenged is a warning that the BBS is preparing further communal violence against Muslims, and other ethnic and religious minorities, with the government’s blessings.
Faced with growing opposition from workers, peasants and students to its austerity measures, the Rajapakse government is encouraging the BBS and other Sinhala-Buddhist extremist organisations to divide and confuse working people. It will also use these reactionary forces against the struggles of workers and youth.