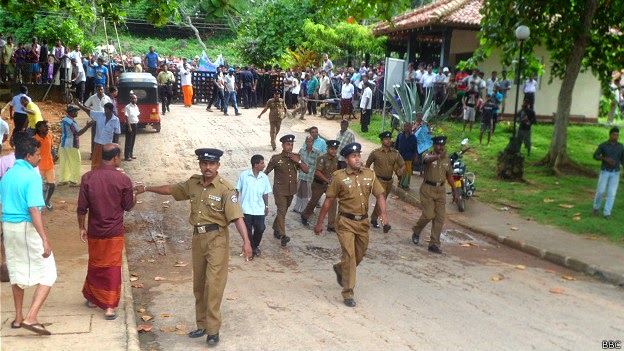 ‘Names of dons who spoke against Deyata Kirula at Senate meeting were leaked to thugs’
The Federation of University Teachers’ Associations (FUTA) yesterday asked the government to stop harassing its members following a recent goon attack on the Ruhuna University students or face a countrywide strike. Addressing a media conference at the Faculty Club of the Colombo University, FUTA President Chandragupta Thenuwara said that the government sponsored thugs had attacked the vehicle of a lecturer of the Ruhuna University during the protest on Monday, demanding that Deyata Kirula exhibition be held within the university premises.

He said that another lecturer of the Jaffna University had also been questioned by the CID recently.

“All those acts are a threat to the university autonomy and unnecessary interference in university matters,” Thenuwara said.

Dr. Upul Abeyratne of the Ruhuna University Humanities and Social Sciences Faculty said he was leaving the university when a group of people protesting opposite the university on Monday attacked his car.

A thug who was under the influence of liquor had shouted that he (Dr. Abeyratne) had, at a Senate meeting, opposed the holding of the Deyata Kirula exhibition and the mob had attacked the vehicle, Dr. Abeyratne said. “They also tried to harm me, but I managed to escape.”

That incident had proved that the details of lecturers against Deyata Kirula exhibition had been leaked to government sponsored thugs, Dr. Abeyratne said.

He said he had reported Monday’s incident and subsequent threats to the Vice Chancellor and the University Security Division besides lodging a complaint with the police.