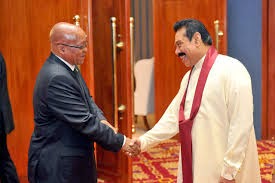 ‘S. African mediation will make NFF leave UPFA’- Wimal warns govt:
Having presented a set of proposals reforms to President Mahinda Rajapaksa at Temple Trees on Saturday, National Freedom Front (NFF) leader, Wimal Weerawansa said yesterday that it would quit the ruling coalition if the government involved foreign powers to facilitate talks with the five-party Tamil National Alliance (TNA).
The NFF leader was responding to a query raised by The Island at a media briefing at the party headquarters at Pelawatte.
The NFF adopted a 12-point plan at its Second Convention held on May 5.
NFF leader Wimal Weerawansa, MP, said now that the LTTE had been eradicated the government should never accept foreign mediation under any circumstance.
South Africa recently appointed Cyril Ramaphosa, Deputy Leader of the ruling African National Congress (ANC) as its Special Representative for the Sri Lankan project. Ramaphosa is widely expected to visit Colombo soon.

s.
Asked whether the NFF would insist that the government accept its fourth proposal, which dealt with a move to involve South Africa in post-war national reconciliation as well as devolution process, Minister Weerawansa said that his party wouldn’t give up that proposal.
The former JVP heavyweight said that he wouldn’t hesitate to quit the government in case the government wasn’t agreeable to NFF proposals aimed at pushing the government to take the right path without squandering an opportunity to re-build the country devastated by three decades of war.
Minister Weerawansa insisted that the NFF was also opposed to Indian mediation. The NFF said that there shouldn’t be further talks with any foreign government or non-state actor as regards the full implementation of the 13th Amendment to the Constitution.
Recollecting the Norwegian mediation in Sri Lanka many years back, Minister Weerawansa said that foreign mediation was inimical to the national interest. Sri Lanka had suffered due to external interventions, it would be a grave mistake on the part of the government to involve outsiders in a purely domestic issue.
The minister said that even if the government accepted the majority of 12 proposals, the NFF wouldn’t drop the fourth proposal.
The Colombo District MP alleged that the government strategy meant to counter an international war crimes probe was wrong. Accusing an influential section of the ruling coalition of misleading the government, Minister Weerawansa said that certain interested parties propagated that a South African role in the post-war national reconciliation process would help thwart international war crimes probe targeting Sri Lanka. The minister insisted that Western powers wouldn’t give up US-led project to haul Sri Lanka up before an international war crimes tribunal due to South African initiative.
Weerawansa claimed that a section of the government wanted to hurt the feelings of those who opposed separatist agenda.
Responding to a query, Minister Weerawansa said that during Saturday’s talks, the NFF received an assurance from President Rajapaksa that he would get back after having consulted senior UPFA leaders. Asserting that discussions took place in a cordial atmosphere, Weerawansa said that there would be another meeting with the President to discuss the NFF’s proposals.
The outspoken minister insisted that he couldn’t say things to appease the President. It would be the president’s prerogative to either accept or reject advice, the minister said, adding that it would be the responsibility of those who genuinely wanted a stable government to tell the truth though it might not please the top leadership.

Tags: Devolution, Sri Lanka, TRC
Previous post Celebration of the War Victory and Suppression of the Remembrance
Next article A climate of fear and intimidation has been re-imposed and has now escalated in the North - C.V. Wigneswaran