HomeFeaturesNewsSri Lanka: Only a very limited progress related to a few LLRC recommendations in 2013 – TSA 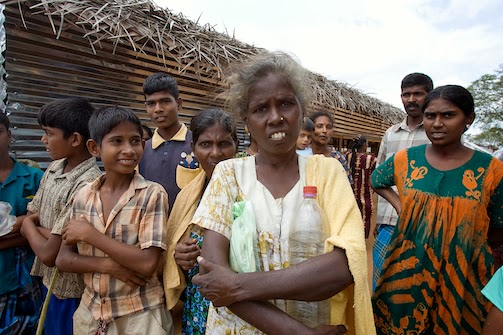 ”TSA’s survey findings suggest that – while some very limited progress related to a few LLRC recommendations has been made over the past twelve months – there are still concerns about matters such as political rights, language rights, inclusive development and compensation, among other areas. The country’s continued militarization, the concomitant culture of fear which pervades the North and East, and the asymmetrical implementation of the LLRC recommendations are also concerns. TSA will delve more deeply into all of these topics in its next report.”

It is important to note that all of TSA’s 1,043 survey respondents have identified themselves as Tamils yet nearly 20 percent say they are unable to get services in the official administrative language of their area.

As noted, according to Sri Lanka’s constitution, the administrative language in the Northern and Eastern provinces is Tamil. Hence, in all eight districts where TSA’s partners implemented this survey, official government business6 should be conducted in Tamil.

At most government departments, the majority of community members do not have trouble getting help in their native language. And, at police stations, some progress has been made during the past twelve months. However, language problems are still prevalent in police stations.

A sixty-seven-year-old man’s grandson disappeared in September of 2009. He told a data collector that he had gone to CID, TID, police stations and numerous camps. He said, “Every time I complained they took down information and asked me to sign on a paper where everything was written in Sinhalese. But I signed because I want to somehow find my grandson.”

Army personnel are still interfering with projects on a regular basis. The Government Agent (GA) was also mentioned frequently.

It appears that there has been some positive progress in terms of the interaction between Tamil politicians who are not aligned with the United People’s Freedom Alliance (UPFA) and military personnel. The recent Northern Provincial Council (NPC) elections may also account for this shift in perceptions. Nonetheless, the fact that 29 percent of survey respondents believe that discrimination continues is cause for concern. Significantly, this year, 113 respondents did not answer. Last year, 88 respondents did not answer.

LLRC recommendation 9.223 has not been included in the GoSL’s most recent update.

And, with a meaningful political solution nowhere in sight, the GoSL has either excluded the relevant recommendations from its update or cited them while failing to explain what progress has been made – as with recommendations 9.230, 9.236 and 9.237. Furthermore, the country’s continued militarization is impossible to avoid.

One survey participant in Kilinochci said, “The people I’m going to respond about as perpetrators are the people in power. How are we supposed to feel safe if we respond?”

The military is still quite active in civilian affairs. 774 people (74 percent of respondents) indicated that state security personnel are involved in civilian cultural activities or other events. This figure is down only slightly from 82 percent a year ago.

As noted, questions about militarization can be difficult for people to answer. The fact that more than 20 percent of survey respondents (251 people) chose not to answer the question above suggests that this is a particularly delicate issue. Last year 152 people did not answer this question.

While the survey was being conducted, a woman from Kalmunai Tamil Division (Ampara) expressed apprehension about her decision to participate in the survey. She told a data collector that, “The information you are collecting will go somewhere. I am scared. My husband was in the LTTE. If the information goes to the wrong people the CID will come here. We women live alone in the house.”

The GoSL seems to think militarization is no longer an issue. In its progress update for recommendations 9.171 and 9.227, the GoSL says that “No further action required. Civilian administration is fully functional…” The GoSL goes on to assert that around 15,000 troops are stationed in the Jaffna peninsula and that the “Gradual reduction of security forces presence is continuing.”

In the following paragraph, the GoSL maintains that a troop reduction in the Northern and Eastern provinces has taken place. Further – in line with its most recent LLRC update – the GoSL contends that “The military has no involvement in civilian administration.”

The reality is starkly different. Based on the date obtained from TSA’s survey – including the sharp increase in “Did not answer” responses – it is more likely that a culture of fear still permeates the North and East.

Compensatory relief
The data obtained from TSA’s survey suggests that many community members arestill in need of compensatory relief. 163 people (61 percent of respondents who are missing at least one family member) still have not received financial assistance.

Unfortunately, it appears that the army is collecting information, but that assistance is not being provided. Many community members are not being provided with the assistance that they need. In its most recent progress update, the GoSL speaks very positively about the achievements that have been made regarding compensation. Many recommendations (9.155, 9.157, 9.158, 9.159, 9.160, 9.162) have been “completed.” The GoSL also mentions that the Rehabilitation Authority has provided loan and compensation schemes to “those involved with the LTTE” (9.164). This sort of government assistance is helpful, but more people are in need of compensation.

During the survey, one ex-LTTE member lamented the lack of assistance that was being provided to ex-combatants. The leader of a Woman-Headed Household, she told a data collector that “Rehabilitated persons are getting little assistance. People like us…who were arrested, tortured on suspicion and released…just aren’t getting any help.”

Conclusion
TSA’s survey findings suggest that – while some very limited progress related to a few LLRC recommendations has been made over the past twelve months – there are still concerns about matters such as political rights, language rights, inclusive development and compensation, among other areas. The country’s continued militarization, the concomitant culture of fear which pervades the North and East, and the asymmetrical implementation of the LLRC recommendations are also concerns. TSA will delve more deeply into all of these topics in its next report.