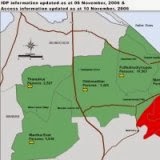 Colombo has seized at least 30,000 acres of residential and agricultural lands for Sinhala colonization in Mullaiththeevu district alone after 2010, according to the data presented by Northern Provincial Council (NPC) member Thurairasa Raviharan, who moved a resolution condemning the demographic changes at the NPC.   The land grab in Sinhalicised Gajabapura in Oddu-chuddaan is also being expanded to the ancient village of Othiya-malai, Mr Raviharan said adding that the Colombo government was using the Mahaweli ‘Development’ Porgramme’s L Scheme to occupy the lands in Mullaiththeevu district. Othiyamalai is situated 25 km beyond the reach of Mahaweli waters, he said.

Sinhalese from South have been brought in to the occupied Tamil villages. Not a single Tamil has received lands from Colombo under the Mahaweli scheme so far in Mullaiththeevu district, the NPC councillor said.