HomeFeaturesNewsSri Lanka: Jayalalitha proporses a UN Referendum for formation of a separate Eelam 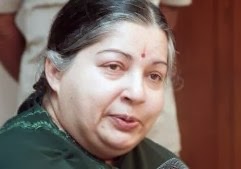 The ruling AIADMK party in Tamil Nadu led by J Jayalalithaa has, in its election manifesto for the 2014 elections, promised to move the UN for holding a Referendum amongst Tamils in Sri Lanka and displaced ones across the world for formation of a separate Eelam (homeland) State. The AIADMK, which wants to see the four-time Tamil Nadu Chief Minister as the country’s next Prime Minister, released its election manifesto a day after party candidates for all 39 Lok Sabha Seats in Tamil Nadu besides the lone Puducherry constituency were announced by Jayalalithaa, Indian media reports said.
“We have spelt out many policies and promises to implement many schemes and aims not only for the development of Tamil Nadu but also for the progress of the entire nation,” Jayalalithaa told reporters after releasing the manifesto.
The 45-page manifesto booklet has two types of poll promises – one for the nation and the other for Tamil Nadu – though there are overlaps.
On foreign policy, the party said long standing border disputes with neighbouring countries should be resolved.
“The AIADMK will work to secure a permanent seat for India in the United Nations Security Council. The foreign policy of the country should not hurt the interests of the states in the country. Hence, the interests of the states will be kept in mind while formulating the foreign policy,” the party said. (Colombo Gazette)
Tags: Devolution, Indo-Lanka relations, Sri Lanka, Tamil rights
Previous post More bodies found in Sri Lanka's mass grave; It is 80 now
Next article Sri Lanka: Gotabhaya over rule reduction of military presence in the Northern Province