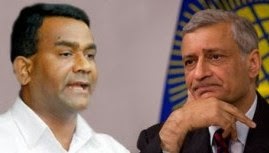 In a letter to the Commonwealth Secretary Kamalesh Sharma, UNP General Secretary MP Tissa Attanayake informs that the UNP has been compelled to change their decision attend inaugural ceremony of the CHOGM today (15). In the letter sent yesterday, MP Attanayake stated that though it was initially stated that the UNP leader and other invitees from the party would attend the event, they had been compelled to change the decision due to latest developments which included the assault on the UNP leader by ‘mobs transported by army and government vehicles’. ‘In view of these developments, the UNP will boycott tomorrow’s opening session and all other related functions,’ MP Attanayake added.

The complete letter of the UNP General Secretary MP Tissa Attanayake is as follows :

I regret to inform you, that the United National Party has been compelled to change our decision to attend the inauguration of the Commonwealth Heads of Government meeting tomorrow morning at the Nelum Pokuna Theatre in Colombo due to the unfortunate developments in the last 24 hours.

In the statement issued by me on 12th November 2013, I clear stated that the Leader of the Opposition and the Leader of my party, Hon. Ranil Wickramesinghe along with other invitees from the UNP will be attending the opening ceremony tomorrow despite many reservations about the continued violations of democratic rights, human rights and the rule of law as well as about the massive and wasteful expenditure incurred by the Government to host this summit.

However,we also felt that as the Chair in Office, President Rajapakse and his government, will be compelled to implement the Commonwealth Charter and change it’s authoritarian direction.

However, the attack against the vehicle of our leader as he tried to enter our party headquarters by mobs transported by army and government vehicles yesterday while the police looked on, reaffirms our belief that the government will not change its despotic tendencies and that it will continue to violate the core values of the Commonwealth Charter even after it assumes the chair. The mobs again returned today to continue its vitriolic campaign against our leader and the party along with an extremist group of monks, known to have close links to the Secretary of the Defence Ministry.

Ironically, these fascist thugs were protesting against an exhibition organised by ‘Samagi’ a coalition of civil society groups highlighting the need to implement the Commonwealth Charter through the speedy implementation of the President’s own LLRC proposals. This exhibition was labelled as treacherous and the state media has unleashed a vicious campaign against all those who have been involved with the exhibition and they have been labelled as ‘traitors’ and LTTE sympathisers.

In view of these developments, the UNP will boycott tomorrow’s opening session and all other related functions.
With kind regards,