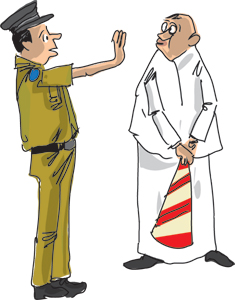 Two parliamentarians, who had tried to show their high-handedness on the Katunayake Expressway, were forced to withdraw following interventions by the security forces personnel.

The parliamentarians who entered the expressway violating the restrictions were from the Western and North Western provinces, sources said.

One MP had removed road barriers and entered the expressway, but after the police were alerted the moving vehicle was brought to a halt and sent back.