On Monday (26) the Buddhist monks of the National Organisation for Ravana Power (Ravana Balaya) marched to the UN office in Colombo demanding that UN Human Rights Chief, Navaneetham Pillay, leave the country.

However, in a shocking display of disregard for the safety of their followers, the “Ravana Balaya” had placed numerous child monks at the front of the protest march. When the protesters encountered the police lines they proceeded to charge them resulting in the police being force to push them back. Trapped in the middle of these scuffles were the young monks.

Members of the “Ravana Balaya” explained that they were proud of the monks who “wanted to be part of this protest. Even at their young age they see the hypocrisy of such a visit, we cannot stop them from participating.”

Police officers on the scene exhibited concern about the presence of the monks, but failed to take any action. When the police spokesperson, G.M.H.B. Siriwardana, was contacted he claimed to have not been notified about this incident but insisted they would look in to the matter. 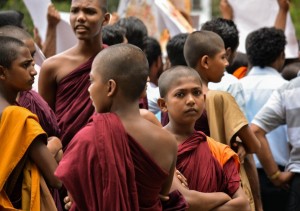