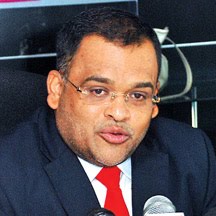 Three people were killed in clashes between demonstrators and the Sri Lankan army on Thursday. Many more were severely beaten, and journalists attempting to cover the demonstrations were attacked and threatened. Some Sri Lankan sources put the eventual death toll as high as six.

Over the last two weeks people have been gathering in the western town of Weliweriya to demonstrate for clean water. They claim that a local latex factory is polluting their drinking water supplies, and that a court case against the factory has been stalled by Sri Lanka’s notoriously political justice system.
The latex factory is owned by Hayleys – a major Sri Lankan company with close ties to the Rajapaska regime. Hayleys are singlehandedly responsible for over 3% of Sri Lanka’s export income and nearly 5% of Sri Lanka’s tea production. Their Chairman and Chief Executive, A.M. Pandithage, was appointed as Sri Lanka’s honorary Consul to Mexico and 23% of the company is owned by Deputy Chairman K.D.D. Perera, who is Secretary to the Ministry of Transport and Sri Lanka’s richest man.

The protests had initially been controlled by the police but by Thursday they had handed over to the army after they had failed to clear several of the roads that demonstrators were blocking. According to reports by Reporters Without Borders, the CPA, Amnesty International, and the Sri Lankan Lawyers’ Collective for Democracy, the army then ordered the crowd – which by this point had grown to somewhere between 500 and 6,000 people – to disperse. When they did not do so they attacked the crowd, some of whom threw rocks back at the Army. Videos then show the Army responding with live ammunition.

There was also a coordinated attempt to stop the demonstrations from being reported. According to RSF:

“Soldiers assaulted a photographer with the Sinhalese and Tamil-language newspaper Ada after forcing him get down from the rooftop in the Weliweriya district of Orutota from which he had taking photos. Soldiers forcibly evicted other reporters from their various vantage points and shut them in a building to prevent them covering the protests.”

Sri Lankan sources quote the Brigadier commanding the operation as saying, “do not try to photograph or video when we disperse the crowds. If you do that, we will smash your cameras.”

There were also a large number of people that were hospitalised in the attack. Many of them allegedly after a group of soldiers stormed a church in which several of the protestors had sought sanctuary. Sri Lankan sources have asked us to publish a picture of one particular man’s injuries after the attack and the BBC Tamil service have already done so: 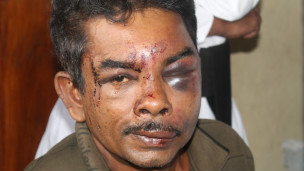 Clearly the army used disproportionate force when policing this demonstration, with tragic results. And as the Sri Lankan army insists on investigating itself after such incidents there will be little hope of any justice or redress for the victims or their families. But the other question that needs to be asked is why the army were placed in charge of dispersing the crowd at all. This is yet further evidence of the Sri Lankan Government’s willingness to turn over civilian matters to the military, and of the military’s total disregard for the safety or rights of Sri Lankans.

This is scarcely the first such incident of recent times. In 2011 heavy handed policing of a demonstration in one of Sri Lanka’s euphemistically-named “Free Trade Zones” left one man dead and over 200 severely injured. In March, war widows and families of the disappeared were detained by the army and prevented from travelling to Colombo to demonstrate. Meanwhile the Buddhist Nationalist extremist BBS have been damaging Mosques and attacking Mosque attendants with impunity, but a peaceful anti-extremist vigil was violently broken up by the police in April.