HomeFeatures“Buddhist Blood is Boiling”-Rise of “Buddhist Terror” in Burma, Thailand and Sri Lanka 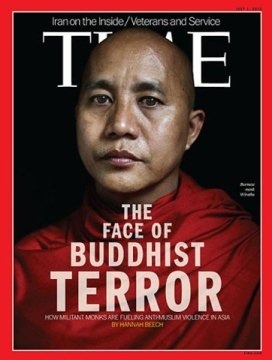 Hannah Beech
His face as still and serene as a statue’s, the Buddhist monk who has taken the title “the Burmese bin Laden” begins his sermon. Hundreds of worshippers sit before him, palms pressed together, sweat trickling down their sticky backs. On cue, the crowd chants with the man in burgundy robes, the mantras drifting through the sultry air of a temple in Mandalay, Burma’s second biggest city after Rangoon. It seems a peaceful scene, but Wirathu’s message crackles with hate. “Now is not the time for calm,” the monk intones, as he spends 90 minutes describing the many ways in which he detests the minority Muslims in this Buddhist-majority land. “Now is the time to rise up, to make your blood boil.”


Buddhist blood is boiling in Burma, also known as Myanmar–and plenty of Muslim blood is being spilled. Over the past year, Buddhist mobs have targeted members of the minority faith, and incendiary rhetoric from Wirathu–he goes by one name–and other hard-line monks is fanning the flames of religious chauvinism. Scores of Muslims have been killed, according to government statistics, although international human-rights workers put the number in the hundreds. Much of the violence is directed at the Rohingya, a largely stateless Muslim group in Burma’s far west that the U.N. calls one of the world’s most persecuted people. The communal bloodshed has spread to central Burma, where Wirathu, 46, lives and preaches his virulent sermons. The radical monk sees Muslims, who make up at least 5% of Burma’s estimated 60 million people, as a threat to the country and its culture. “[Muslims] are breeding so fast, and they are stealing our women, raping them,” he tells me. “They would like to occupy our country, but I won’t let them. We must keep Myanmar Buddhist.”

Such hate speech threatens the delicate political ecosystem in a country peopled by at least 135 ethnic groups that has only recently been unshackled from nearly half a century of military rule. Already some government officials are calling for implementation of a ban, rarely enforced during the military era, on Rohingya women’s bearing more than two children. And many Christians in the country’s north say recent fighting between the Burmese military and Kachin insurgents, who are mostly Christian, was exacerbated by the widening religious divide.
Radical Buddhism is thriving in other parts of Asia too. This year in Sri Lanka, Buddhist nationalist groups with links to high-ranking officialdom have gained prominence, with monks helping orchestrate the destruction of Muslim and Christian property. And in Thailand’s deep south, where a Muslim insurgency has claimed some 5,000 lives since 2004, the Thai army trains civilian militias and often accompanies Buddhist monks when they leave their temples. The commingling of soldiers and monks–some of whom have armed themselves–only heightens the alienation felt by Thailand’s minority Muslims.

Although each nation’s history dictates the course radical Buddhism has taken within its borders, growing access to the Internet means that prejudice and rumors are instantly inflamed with each Facebook post or tweet. Violence can easily spill across borders. In Malaysia, where hundreds of thousands of Burmese migrants work, several Buddhist Burmese were killed in June–likely in retribution, Malaysian authorities say, for the deaths of Muslims back in Burma.

In the reckoning of religious extremism–Hindu nationalists, Muslim militants, fundamentalist Christians, ultra-Orthodox Jews–Buddhism has largely escaped trial. To much of the world, it is synonymous with nonviolence and loving kindness, concepts propagated by Siddhartha Gautama, the Buddha, 2,500 years ago. But like adherents of any other religion, Buddhists and their holy men are not immune to politics and, on occasion, the lure of sectarian chauvinism. When Asia rose up against empire and oppression, Buddhist monks, with their moral command and plentiful numbers, led anticolonial movements. Some starved themselves for their cause, their sunken flesh and protruding ribs underlining their sacrifice for the laity. Perhaps most iconic is the image of Thich Quang Duc, a Vietnamese monk sitting in the lotus position, wrapped in flames, as he burned to death in Saigon while protesting the repressive South Vietnamese regime 50 years ago. In 2007, Buddhist monks led a foiled democratic uprising in Burma: images of columns of clerics bearing upturned alms bowls, marching peacefully in protest against the junta, earned sympathy around the world, if not from the soldiers who slaughtered them. But where does political activism end and political militancy begin? Every religion can be twisted into a destructive force poisoned by ideas that are antithetical to its foundations. Now it’s Buddhism’s turn.

Mantra of Hate
Sitting cross-legged on a raised platform at the New Masoeyein monastery in Mandalay, next to a wall covered by life-size portraits of himself, the Burmese bin Laden expounds on his worldview. U.S. President Barack Obama has “been tainted by black Muslim blood.” Arabs have hijacked the U.N., he believes, although he sees no irony in linking his name to that of an Arab terrorist. About 90% of Muslims in Burma are “radical, bad people,” says Wirathu, who was jailed for seven years for his role in inciting anti-Muslim pogroms in 2003. He now leads a movement called 969–the figure represents various attributes of the Buddha–which calls on Buddhists to fraternize only among themselves and shun people of other faiths. “Taking care of our own religion and race is more important than democracy,” says Wirathu.

It would be easy to dismiss Wirathu as an outlier with little doctrinal basis for his bigotry. But he is charismatic and powerful, and his message resonates. Among the country’s majority Bamar ethnic group, as well as across Buddhist parts of Asia, there’s a vague sense that their religion is under siege–that Islam, having centuries ago conquered the Buddhist lands of Indonesia, Malaysia, Pakistan and Afghanistan, now seeks new territory. Even without proof, Buddhist nationalists stoke fears that local Muslim populations are increasing faster than their own, and they worry about Middle Eastern money pouring in to build new mosques.

In Burma, the democratization process that began in 2011 with the junta’s giving way to a quasi-civilian government has also allowed extremist voices to proliferate. The trouble began last year in the far west, where machete-wielding Buddhist hordes attacked Rohingya villages; 70 Muslims were slaughtered in a daylong massacre in one hamlet, according to Human Rights Watch. The government has done little to check the violence, which has since migrated to other parts of the country. In late March, the central town of Meikhtila burned for days, with entire Muslim quarters razed by Buddhist mobs after a monk was killed by Muslims. (The official death toll: two Buddhists and at least 40 Muslims.) Thousands of Muslims are still crammed into refugee camps that journalists are forbidden to enter. In the shadow of a burned-down mosque, I was able to meet the family of Abdul Razak Shahban, one of at least 20 students at a local Islamic school who were killed. “My son was killed because he was Muslim, nothing else,” Razak’s mother Rahamabi told me.

Temple and State
In the deep south of Burma’s neighbor Thailand, it is the Buddhists who complain of being targeted for their faith. This part of the country used to be part of a Malay sultanate before staunchly Buddhist Thailand annexed it early last century, and Muslims make up at least 80% of the population. Since a separatist insurgency intensified in 2004, many Buddhists have been targeted because their positions–such as teachers, soldiers and government workers–are linked with the Thai state. Dozens of monks have been attacked too. Now the Buddhists have overwhelming superiority in arms: the Thai military and other security forces have moved into the wat, as Thai Buddhist temples are known.

If Buddhists feel more protected by the presence of soldiers in their temples, it sends quite another signal to the Muslim population. “[The] state is wedding religion to the military,” says Michael Jerryson, an assistant professor of religious studies at Youngstown State University in Ohio and author of a book about Buddhism’s role in the southern-Thailand conflict. Muslims too are scared: more of them have perished in the violence than Buddhists. (By proportion of population, more Buddhists have died, however.) Yet Buddhists are the ones who receive the greater state protection, and I listen to monk after monk heighten tensions by telling me that Muslims are using mosques to store weapons or that every imam carries a gun. “Islam is a religion of violence,” says Phratong Jiratamo, a former marine turned monk in the town of Pattani. “Everyone knows this.”

It’s a sentiment the Burmese bin Laden would endorse. I ask Wirathu how he reconciles the peaceful sutras of his faith with the anti-Muslim violence spreading across his Bamar-majority homeland. “In Buddhism, we are not allowed to go on the offensive,” he tells me, as if he is lecturing a child. “But we have every right to protect and defend our community.” Later, as he preaches to an evening crowd, I listen to him compel smiling housewives, students, teachers, grandmothers and others to repeat after him, “I will sacrifice myself for the Bamar race.” It’s hard to imagine that the Buddha would have approved.
COURTESY: TIME/DBS