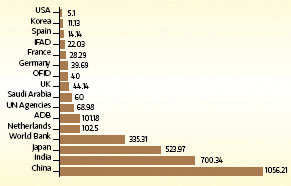 With concessionary loans amounting to US$ 324 million, the World Bank came in fourth. It also provided US$ 10.49 million in grants.

The Netherlands came in fifth with loans amounting to US$ 102.50 million and no grants.

The Asian Development Bank was next with US$ 99.68 milllion. Saudi Arabia came in seventh with loans amounting to US$ 60 million.

The US, who sponsored resolution against Sri Lanka before the UN Human Rights Council in Geneva provided a US$ 5.10 million grant to the government.

Loans from Germany and France amounted to US$ 34.42 million and 28.29 million respectively with Germany throwing in a grant of US$ 5.27 million.

“Although the total commitments have slightly declined in 2011 in all types of financing compared with 2010 as commitments for financing some key development projects were made in 2010, they improved again in 2012. The total value of the foreign financing commitment made by development partners and lending agencies in 2012 was US$ 3,152 million of which project loans accounted for US$ 2,789 million and grant assistance accounted for US$ 363 million,” the Treasury said in its latest annual report released last Monday.

“Out of the total commitments during 2012, 33 percent was made by China while another 22 percent was from India, 17 percent from Japan, 11 percent from the World Bank, 3 percent each from the Asian Development Bank (ADB) and Netherlands while the remaining 14 percent of the total commitments was received from other development partners and lending agencies,” it said.

“The amount of concessionary loans in the annual loan portfolio has declined gradually from US$ 2,615 million in 2006 to US$ 1,475 million in 2012 while non-concessional financing has increased from US$ 260 million to US$ 1,677 million during the same period.