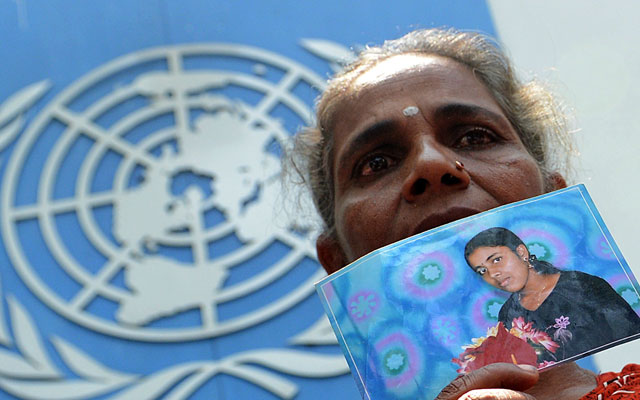 The resolution supports reconciliation efforts and requires government investigation into allegations of human rights abuses and indiscriminate killings of Tamil civilians that allegedly took place during the final days of the conflict between the Liberation Tigers of Tamil Eelam (LTTE) and the Sri Lankan government in 2009.

The U.S. action in the UNHRC is laudable, especially since it draws attention to the general human rights situation in Sri Lanka. The U.S. can no longer turn a blind eye to President Mahinda Rajapaksa’s increasingly authoritative actions that threaten to undermine the very foundations of democracy in Sri Lanka.

The resolution calls upon the Sri Lankan government to implement “constructive recommendations” made by the Lessons Learnt and Reconciliation Commission (LLRC), which include investigation of human rights violations, improved land dispute resolution measures, increased efforts to move toward political devolution, and other notable reforms.

However, the resolution notes that the LLRC is not a comprehensive solution. Thus, it calls for outside actors to guide Sri Lankan officials as they implement practical solutions in forming a legitimate government.
The decision to introduce a resolution seems to have been prompted by the alleged violations of human rights carried out during the war with the LTTE and also in order to draw attention to Rajapaksa’s more recent actions that are undermining democracy in general. As Assistant Secretary of State Robert O. Blake said, the U.S. has been “disappointed that there has been some backward movement on democracy” in Sri Lanka.

In many ways, Sri Lanka’s political designation as a democracy is in name only. The executive no longer has term limits and now has power over Sri Lankan government commissions on human rights, finance, corruption, and many other issues. Such rash actions blurred the distinctions between the executive, legislative, and judicial branches and demonstrated that amendments to the constitution are no longer relegated to legislative authority and instead rest within the power of the President.
Rajapaksa further thwarted the system of checks and balances by his recent removal of the chief justice of the Sri Lankan Supreme Court in January 2013. Since Sri Lanka no longer has an independent judiciary, the Rajapaksa administration is left unchecked.

The UNHRC resolution helps highlight the human rights problems in Sri Lanka and puts pressure on the Sri Lankan government to move forward with implementation of the findings from the LLRC. But Washington will need to keep up the international pressure in order to stem the systematic undermining of democratic traditions and institutions in Sri Lanka.
Olivia Enos
TF