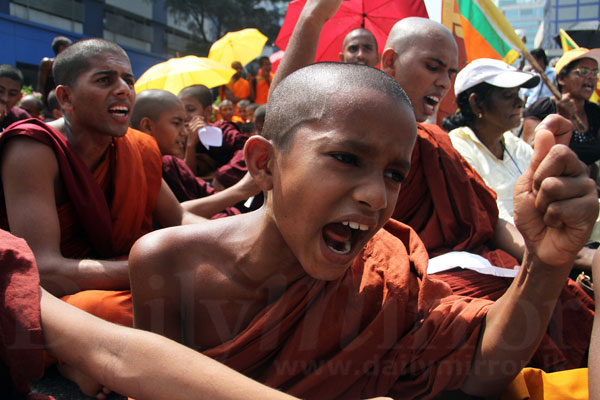 The Jeddah-based Organization of Islamic Cooperation (OIC), the parent body of 57 member countries, has expressed its concerns yesterday over the escalating ethnic tensions in Sri Lanka, which has affected the island’s Muslim community and its businesses sector.

The (OIC) (formerly known as the Organization of the Islamic Conference) is the second largest inter-governmental organization after the United Nations, with a membership of 57 states spread over four continents. The organization is the collective voice of the Muslim world and strives to safeguard and protect the interests of the Muslims in the spirit of promoting international peace and harmony among various people of the world.

In a letter addressed to the Sri Lankan government, the OIC expressed its concerns amid increasing reports of ethnic tensions in parts of Sri Lanka particularly in the central province of Buwelikade, which has a large Muslim population.

Confirming the receipt of the letter from the OIC, an official from the Sri Lankan embassy said the communication has been referred to its Ministry of External Affairs in Colombo for necessary action.

The OIC has pointed out that it is confident that the Lankan government is taking the appropriate measures to calm the situation on the ground. The organization has also signified its willingness to explore with its Sri Lankan counterparts the possibility of extending humanitarian assistance to the affected communities, including the refugees in the northern part of the island.

In Sri Lanka, an organization called Bodu Bala Sena, (the Buddhist Power Force), is at the forefront of inciting violence against Muslims in various parts of the country. Bodu Bala Sena as well as Jathika Hela Urumaya (JHU), a partner in the ruling coalition, allege that Muslims are a threat to Buddhism.

This organization recently launched a provocation against Muslims at Buwelikada, a small town 15 kilometers from Kandy in the Central Province. The town’s predominantly Muslim population includes small shop owners and vendors.

A group of Sinhala youth traveling in a bus initiated a quarrel with Muslims, claiming that their van had obstructed the road, which escalated into a clash causing severe injuries. The government immediately deployed units from its police special task force (STF) to bring the situation under control.

In response to the hatred campaign carried out against the Muslims by this extremist movement, the All-Ceylon Jamiyathul Ulema, (The Board of Islamic Scholars), which issues halal certification in Colombo, has conceded to limit its certification only to export oriented products. “With the withdrawal of halal certification from local products, Muslims in our country will not be able to identify halal and non-halal products,” N.M. Ameen, president of the Muslim Council of Sri Lanka told Arab News from Colombo.

The council’s president said the government has intervened to calm the tension, adding that the Inspector General of Police has stated that the government will not tolerate any discrimination against minorities. Muslims constitute 8 percent of Sri Lanka’s 22 million, while Buddhists make up for 80 percent of the population.

Considering the increasing violence against Muslims and their businesses, the government has appointed a ministerial committee under former Prime Minister Ratnasiri Wickremanayake to resolve the issues between extremist group and the Muslim community, Arab News reports.
AD