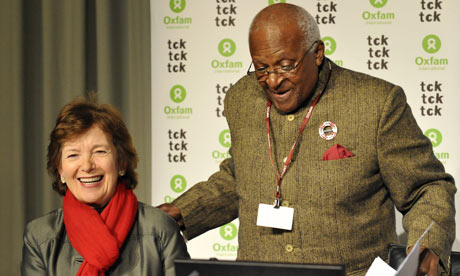 DESMOND TUTU & MARY ROBINSON
Absence of war is not peace: the saying is true of Sri Lanka today.
While the country’s civil war ended four years ago, and roads have been rebuilt, human rights protections are getting weaker. The personal tragedies of the conflict’s victims have yet to be acknowledged and accounted for. The climate required for reconciliation does not yet exist.

The UN Human Rights Council, whose new session has just begun in Geneva, has a unique opportunity to pressure Sri Lanka’s authorities into meaningful action. In doing so, it would preserve the hope for accountability and reconciliation harboured by all Sri Lankans. The present culture of impunity must end.

Last year, the Council passed a landmark resolution calling on Sri Lanka to implement the recommendations identified by its own government, in a report of the Lessons Learned and Reconciliation Commission (LLRC). The Elders, a group of independent leaders committed to peace and human rights, to which we belong, fully supported the resolution at the time. It was a decisive step in the right direction.

Unfortunately, too little has happened since. Lasting reconciliation; upholding the rule of law; protection of human rights: it is difficult to feel positive about any of these essential objectives today.

On February 16, Faraz Shauketaly, a prominent investigative journalist, was shot in his home – only the latest incident in a worrying trend of attacks against critics of the government. In January, the impeachment of the Supreme Court’s chief justice, Shirani Bandaranayake (the first woman to hold this role), was a blatant disregard for the rule of law and the independence of the judiciary.

There has, furthermore, been almost no meaningful action to implement the LLRC’s recommendations. Deadlines have been pushed back, and parts of the government are threatening to renege on, or weaken, previous pledges.

We also support calls by Sri Lankan civil society, and by the UN High Commissioner for Human Rights, for an independent and credible international investigation into alleged violations of human rights and international humanitarian law perpetrated by the Sri Lankan Armed Forces, the Liberation Tigers of Tamil Eelam and other rebel factions in the final months of the civil war. According to the UN, as many as 40,000 civilians were killed.

How the Council chooses to act at this time will have a profound impact on Sri Lanka’s standing in the international community. In this regard, we urge the Commonwealth to seriously reconsider appointing Sri Lanka as its chair for 2013-15, as it currently plans to do. In this role, Sri Lanka would host the biennial meeting of Commonwealth heads of government in November this year.

The prime minister of Canada, Stephen Harper, has already threatened to boycott the summit if the situation does not improve. The UK Parliament has called on its prime minister, David Cameron, to do the same.

As Elders, we welcome this forthright stance and recall the Commonwealth’s founding commitments to democracy, freedom, peace and the rule of law.

The Human Rights Council – still a relatively young institution, created by the UN in 2006 – must show that it can build on its successes from one session to the next: if last year’s resolution gave Sri Lankans hope, this year’s session must go further to keep their hope alive.

Other crises have flared in the past year. Syria and Mali, to take two obvious examples, rightly figure high on the Council’s agenda. The case of Sri Lanka offers a different test: of the Council’s ability to hold governments accountable even when global attention has turned elsewhere.

Desmond Tutu is a Nobel peace laureate. Mary Robinson is former president of Ireland. Both are members of The Elders, a group of independent leaders working for peace, justice and human rights.
TI