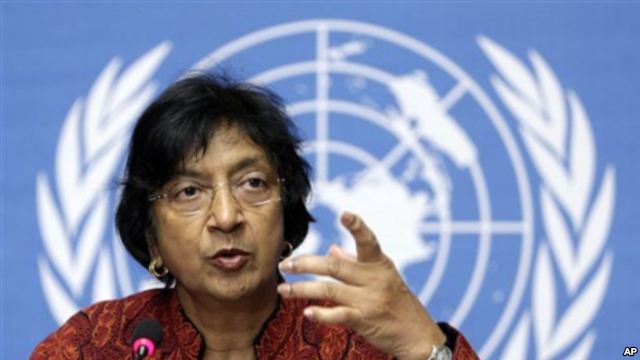 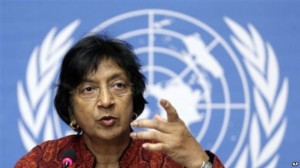 There is to be another resolution on Sri Lanka at the upcoming sessions. What use are such resolutions, when (as is evident from your most recent report to the Council) the last one had such little impac

I disagree. It is not that the last resolution has had little impact, but rather, that the Govt. has made little progress in pursuing true accountability and reconciliation measures. But in response to the resolution, the Govt. has at least made commitments and plans of action, and there is a framework in which to measure progress. I also think the resolution has sparked a proper debate on these issues in Sri Lanka, in which, calmer and more rational voices from civil society can be heard.

The Govt. says it serves no purpose to introduce “resolution after resolution” on Sri Lanka, so soon after it defeated a brutal terrorist organisation; that such resolutions are impediments to reconciliation and its domestic programmes.
I welcome the fact that decades of terrorism by the LTTE have come to an end. They were indeed a very brutal organisation. It is, nevertheless, important to address all situations where there have been massive HR violations, so that they are not brushed under the carpet, with the inevitable result that resentments begin to fester and harden, dramatically jeopardizing the chances of long-term peace and stability. It is hard to see how real reconciliation will be possible, if the truth is not told, and if justice is not seen to be carried out.

You expressed strong concern about the impeachment of the Chief Justice (CJ) and its impact on the rule of law. The Govt. accused you of overreaching your mandate. Didn’t you?

No. My mandate is to protect and promote the HR of everyone everywhere. And for HR to be protected, obviously, you must have an effective system of rule of law. There must be all the necessary checks and balances. As a former judge myself, both at home in South Africa and in international courts, I am acutely aware of how important it is to maintain the integrity and independence of the judiciary. And I have questioned politicised actions against the judiciary in many other countries.

The CJ was impeached after last year’s resolution was passed, and pending your report to the HRC this year. What does this tell you about the Govt.’s attitude?

My concern is that the impeachment of the CJ actually runs contrary to achieving accountability and reconciliation. The Lessons Learned and Reconciliation Commission rightly recognised that strengthening the rule of law is necessary for Sri Lanka to overcome the legacy of the conflict, but this action has eroded judicial independence and the rule of law. It has also further divided and polarised the community, making reconciliation more difficult.

You keep calling for an international war crimes investigation, particularly, into what happened during the final stages of the war. Why is this still so important?

Because tens of thousands of civilians were reportedly killed. Because there are very credible allegations and some strong pictorial evidence and witness accounts indicating that war crimes and other serious international crimes, including summary executions, use of child soldiers and the use of civilians as human shields took place on a large scale.

These are crimes that are viewed with the utmost seriousness under international human rights and humanitarian law, and there is plenty of evidence to suggest both sides committed them. Unfortunately, none of the steps taken domestically in Sri Lanka, to investigate any of this, inspire confidence. There is a long history of national inquiries in Sri Lanka that have led nowhere, but to impunity. This makes such an international investigation essential. Crimes like these cannot simply be ignored or pushed aside. If there has been exaggeration or distortions, or unjust allegations, then such an inquiry should also expose those. There has to be justice, if there is to be lasting peace.

Why do you suppose an international war crimes investigation is nowhere close to being initiated?

There are plenty of cases where the wheels of justice ultimately turn, although it can take time. But I don’t like to see the victims suffering so long, without any justice or redress for the appalling losses and personal damage they have endured.

Could it be that, given all the crises around the world, there is little international appetite for an investigation into a war that ended three years ago?

I think there is actually increasing appetite, as people start to see more details of what happened. The HR Council is now more active on comparable situations, and it is not surprising it should be returning to this issue.

There is also little local interest (among the majority public) in Sri Lanka, for such an investigation. How would you assess such sentiment?
I think some people just want to get on and forget, or would prefer not to know the full details of what happened. That is quite understandable after a long and vicious war like this, but it is also counter-productive, because it hinders a long-term solution. The LTTE were a particularly vicious group, and people are happy to see the end of them. But the Tamil population in Sri Lanka, especially in the war-affected parts of the country, must be treated fairly. They went through a quite atrocious experience. Crimes committed against them must be investigated, just like crimes committed by the LTTE.

The HRC is genuinely accused of double standards vis–vis Sri Lanka, and some other pro-Western countries (for instance, Saudi Arabia, Bahrain, Yemen, Occupied Territories). Is this exercise merely to inflict continuing diplomatic torture on Sri Lanka, until they fall in line with the West?

None of the countries you mention has gone through a conflict like the one in Sri Lanka. But there have just been similar inquiries on the occupied Palestinian territories: There was one on the 2009 conflict in Gaza, led by Justice Goldstone, about the same time as the last stage of the conflict in Sri Lanka began, and another major report has just been submitted to the HRC on the settlements in the occupied Palestinian territories. I have personally spent considerable time and effort on the situations in Bahrain – where an international Commission of Inquiry headed by eminent international jurist Cherif Bassiouni, issued a very important report — and Yemen, where we recently opened an office and are actively engaged in transitional justice issues.

Are you aware of the recent protests against the Muslim community? If you are, do you have any concerns about this?

I am worried that the current climate in Sri Lanka is fostering intolerance and even violence towards minorities including the Muslim and Christian communities. We have seen manifestations of this before, and Sri Lanka should engage its civil society and religious leadership in preventing such tensions. That is why a visit by the Independent Expert on minority issues would be very timely, as she would be in a position to make expert recommendations on how to address the situation.

In the run-up to each HRC session, there is a heavy onslaught against Sri Lanka by rights groups and civil society. Channel 4 routinely times the release of its documentaries with some session or the other. There seems to be an orchestrated “conspiracy” against the Sri Lanka Govt. Do you think this is fair?

People should not confuse campaigns – which are legitimate activities – with conspiracies. I am not at all surprised that there are campaigns being carried out by HR activists, for all the reasons we have discussed already. This is a symptom of the fact that there has not yet been a proper independent and credible investigation into all the HR violations that took place during the conflict, with the aim of bringing sorely needed justice and reparations.
Sri Lanka states that it has engaged with the UN system consistently and transparently, and therefore, expects reciprocity from your office. Why do you not reciprocate?

I meet with Sri Lankan govt. officials, whenever they ask for a meeting. My staff engage with the Sri Lanka govt. and Sri Lanka civil society on many different levels – just as I do with other govts. and other civil society actors. I shared my report to the HRC with the Govt., and incorporated many of its comments. I have offered my office’s assistance to the Govt., and hope for a positive response.

Isn’t it the High Commissioner’s mandate to work in cooperation with member States, rather than in a confrontational manner, as HR cannot be promoted and protected without cooperation of the elected govt?

Indeed, I look for cooperation with all govts., but, at the same time, my mandate also involves acting as the voice of the victims, and speaking out when needed.
ST

Tags: Accountability, LLRC, Navi Pillay, UNO
Previous post A referendum is needed for the 13th amendment in the constitution -GOTA
Next article Neo-fascism on the rise in Sri Lanka