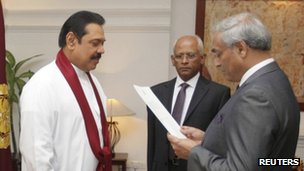 Sri Lanka’s main lawyers association has boycotted the inauguration of the new chief justice in protest at the impeachment of his predecessor.

Mohan Peiris was sworn in last week, but the official ceremony took place on Wednesday.

Mr Peiris replaced Shirani Bandaranayake, who was removed after being impeached over allegations of financial and official misconduct.

She denies the charges and her lawyers say she did not have a fair trial.

Her removal was pronounced unlawful by the courts and condemned by the opposition.

Ahead of the inauguration, Sri Lanka Bar Association Chairman Wijeyadasa Rajapakshe, confirmed to the BBC that the organisation did “not welcome” Mr Peiris.

However he acknowledged that Mr Peiris was the country’s “de facto chief justice” and that the body would have to work alongside him in the future so it did not “let down” its clients, says the BBC’s Charles Haviland in Colombo.
Ms Bandaranayake, 54, faced a parliamentary committee late last year which investigated the charges against her. It found her guilty of three out of 14 misconduct charges.

Two recent court rulings found the impeachment process was unconstitutional, but earlier this month President Mahinda Rajapaksa ratified a vote in parliament – which is dominated by his supporters – to impeach her.

Ms Bandaranayake has said the allegations against her are “blatant lies” and that she is being persecuted because she “stood for an independent judiciary and withstood the pressures”.

She has since said that she believes that she and her family are in danger. Lawyers who have represented or criticised the impeachment also say they have received death threats.

The president says the government “never deviated from the constitution” during the process.

But critics of the impeachment in Sri Lanka and abroad have viewed the move as an attempt by President Rajapaksa and his three powerful brothers to consolidate their already tight grip on the country, says our correspondent.

UN human rights chief, Navi Pillay described the developments as a “calamitous setback for the rule of law”.