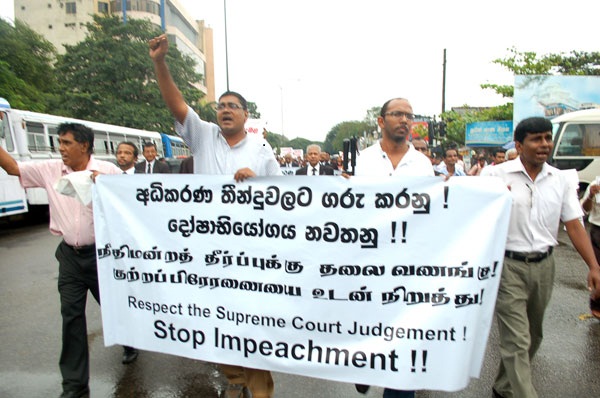 Parliament’s impeachment motion has defied the rulings of the country’s Supreme Court and Court of Appeal, and thus thrown into chaos the entire system of checks and balances in the country,” said Sam Zarifi, ICJ’s Asia-Pacific director.

“Sri Lanka’s parliament and executive have effectively decapitated the country’s judiciary in pursuit of short term political gain. As an immediate matter, this has precipitated a legal and constitutional crisis of unprecedented dimensions; but just as worrying are the consequences of this action, which severely erodes accountability and the rule of law in a country already suffering from decades of impunity.”

The impeachment decision now goes to President Mahinda Rajapakse, who precipitated this crisis initially. Under Article 107 of the 1978 Constitution of Sri Lanka, a Chief Justice can only be removed by an order of the President after a motion supporting the removal is passed by a simple majority of Parliamentarians.

The impeachment process against Chief Justice Shirani Bandaranayake has been widely criticized for ignoring international standards and practice. On 6 December 2012, the Chief Justice and her team of lawyers walked out of the impeachment hearing in protest over the denial of a fair hearing. On 1 January 2013, the Supreme Court ruled that the impeachment procedure in Parliament was not constitutionally valid, finding that such procedures could only be established ‘by law’ enacted by Parliament.

The Bar Association of Sri Lanka has publically vowed that it will not welcome a new Chief Justice and the Lawyers Collective has called on the Supreme Court and the superior judiciary to not recognize the newly appointed Chief Justice.

“President Rajapakse should refuse to appoint a new Chief Justice, and instead call on Parliament to enact a new law – through a transparent and democratic process – to govern the impeachment process. Any such law must comport with international standards on judicial independence and guarantees of due process and fair trial,” Zarifi added.

Tags: Impeachment, Independence of judiciary, NGOs, Sri Lanka
Previous post If you do not Listen to the Supreme Court Order or Violate the Constitution you are Making this Country a Failed State
Next article Commonwealth tells Lanka to consider consequences