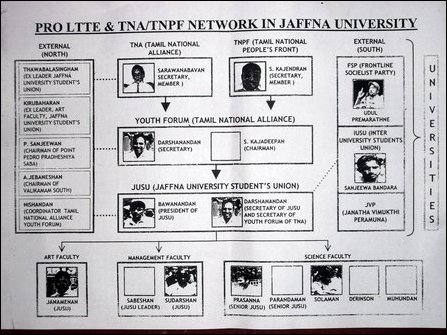 Sri Lanka’s Terrorist Investigation Division (TID) has sent summons to Tamil National People’s Front (TNPF) President, Gajendrakumar Ponnambalam, asking him to be present at its investigating office in Colombo on Saturday for inquiries. The summon note, entirely in Sinhala language, was served at Gajendrakumar’s residence in Colombo by a TID officer on Thursday afternoon. Mr. Gajendrakumar is currently outside of the island, informed sources told TamilNet. Meanwhile, notices in Sinhala and English, viciously implicating TNPF Secretary and former TNA parliamentarian, Selvaraja Kajendran as one of the key persons behind the ‘pro-LTTE and TNA/ TNPF network’ in the Jaffna University, is being circulated in the south of the island.

The Tamil National Alliance (TNA) parliamentarian, Mr. Saravanabhavan is also implicated along with Kajendran in the notices circulated, alleging that both are in contact with the ‘Tiger diaspora’ and they try to recreate the LTTE.

The notices in English were painting a picture of the ‘organisation links’ through a chart produced in them and the text in Sinhala, citing the chart, was levelling allegations against Kajendran and Saravanabhavan.

Terrorist investigation summons were recently sent to the Bishop of Mannaar, who from SL government records had brought to light the number of civilians missing in the war, students of the University of Jaffna, who recently undertook peaceful observation of the Heroes Day and democratically protested the SL military atrocities on the students, and the President of the Jaffna University Teachers’ Association, whose trade union expressed solidarity with the students.
Tamilnet