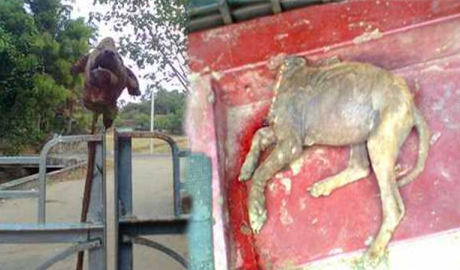 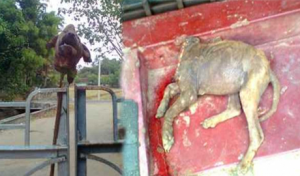 2011.July.08,  Yesterday night , a most strange and disgracefully despicable vindictive action was launched on a TNA candidate in Jaffna. The dog reared in the house of C . Sivakumar ,Tamil National Alliance (TNA) candidate for the Waligamam municipal council elections , Jaffna had been cruelly killed and its decapitated head hung on the gate of this candidate by his opponents in order to take political revenge on him.

A TNA spokesman speaking to Lanka e news said , at the meeting held by the TNA yesterday evening , TNA M P Suresh Premachandra made an accusation that the security Forces are not permitting a free and fair election to be conducted in Jaffna. This dastardly ‘human cruelty to an innocent dog’ reaction, they suspect has therefore been resorted to by those who were offended by Premachandra’s allegation , the spokesman added.

Earlier too, a carcass of a dog was found thrown over the grave of Prabhakaran’s mother when she died.

(In the pictures is shown the dog that was killed and dog’s head that was hung on the gate.)